ACHA: THE PRIDE OF THE PLATEAU 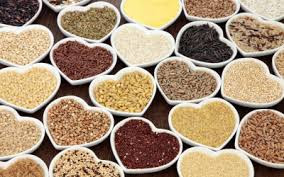 On the Plateau there’s this specie of millet called “Acha” or “Fonio”, the taste alone fortells a lot of nutrition and healthfulness. It can be consumed as a pudding, boiled or jollof with vegetables. I even learnt from the locals that it only grows here in the entire country! The small size of acha means they require little processing, minimizing the loss of nutrients during milling. And it’s gluten free, making fonio another possible nutritive wheat substitute. Could it be the next quinoa?

Amino Acid Profile:
Like other grains, acha is widely reported to be rich in amino acids but particularly in the amino acids methionine and cystine which supply sulfur and other compounds required by the body for normal metabolism and growth. Methionine is an essential amino acid, which the body needs for health but cannot synthesise; it can only obtain it from food. It helps the liver to process fat, and is also a methyl donor, capable of giving off a molecule needed for a wide variety of chemical and metabolic reactions inside our body, including the manufacture of the amino acid taurine. Cystine is a major constituent of the proteins that make up hair, nails and skin, and is involved in major detoxification processes in the body. Methionine levels are higher than those found in sorghum and other millets and the amino acid is reportedly deficient in other major cereals such as wheat, rice, barley and rye. When tested, acha also appeared to be richer than pearl and finger millets in phenylalamine, another essential amino acid 8. The body needs phenylalanine to create various brain chemicals and thyroid hormones as well as tyrosine (another amino acid that it uses to make proteins
Tests have shown that the methionine level in acha is twice that found in egg protein, leading to suggestions that acha might be used to complement standard diets . It’s also suggested that the high content of these sulphur amino acids would make acha an excellent nutritional complement to legumes as most legumes are low in methionine (but high in lysine, which is lacking in cereal grains).
Low Glycaemic Index:
The Glycaemic Index (GI) ranks foods based on their overall effect on blood glucose levels. Foods that are slowly absorbed produce only small fluctuations in our blood glucose and insulin and therefore have a low rating. Choosing low GI foods is important for those with diabetes because these foods can help even out blood glucose levels. They can also reduce the risk of heart disease. A study by Sante Diabete Mali of the influence on glycaemia of different cereals and sauces consumed in Mali showed that fonio had a low GI of 56.95 +/- 18 (compared to sorghum, corn & white rice which had intermediary GIs, and sorghum paste & corn paste which had elevated GIs. Nutraceuticals are now said to play a role in diabetes. It is believed that acha may have nutraceutical properties. Resistant starch is part of some ingredients that assist in preventing and managing prediabetes and type 2 diabetes.
Minerals
Fonio is reputed to be richer in magnesium, zinc, and manganese than other cereals. It is also significantly richer in thiamine (Vitamin B1), riboflavin (Vitamin B2), calcium and phosphorous than white rice. Levels of phosphorous, an essential mineral needed by all human cells for normal function, are high and tests by the Laboratory of Food Technology and Animal Nutrition in Mali indicate that phosphorous and potassium are major minerals in fonio grains. Phosphorous is found mainly in bones and is a constituent of many vital compounds in the body, including ATP, DNA, and phospholipids. Potassium is crucial to heart function and plays a key role in skeletal and smooth muscle contraction, making it important for normal digestive function, while it is also an important electrolyte. Acha also appears to have appreciable amounts of iron and, compared to white rice, is significantly richer in this essential mineral. In one study acha which had been cleaned, steam cooked and drum dried contained 10.74mg iron /100g. Compare this to brown rice which, in a separate study, contained 1.1 ± 0.1 mg/100 g – appreciably less than acha.

Other Benefits:
It is possible that acha is a potentially important source of nutraceuticals such as antioxidant phenolics and cholesterol-lowering waxes. It was previously reported that acha helps diabetic patients in parts of West Africa. The healthful, cholesterol lowering, and cancer-risk-reduction potential of cereals and cereal fractions has been predicted by evaluating their in vitro bile acid binding under physiological conditions. There is increasing approach to use more of grains for health maintenance. Consumption of the grain as whole grain makes it an excellent sourceof dietary fibre and associated nutraceutical benefits of whole grain suitable for the health conscious and for obesity and other diseases, such as diabetes.
Acha protein has a composition similar to that of white rice, but having relatively higher sulphur amino acid(methionine and cystine) content. Sulphur amino acids are crucial for proper heart function and nerve transmission, and cereal sare an essential source of amino acids for people with low meat intake. This and other attributes of acha show the uniqueness of the grain and it’s potential in contributing significantly to whole grain diets. Undoubtedly, utilisation would also lead to improvement in economic status of the producers inAfrica. Acha proteins have been shown to be less susceptible to denaturation than durum protein.
Tags : Health Benefits of Acha
previous article