Health Benefits and Disadvantages of Potatoes

EVERYTHING YOU NEED ON POTATOES 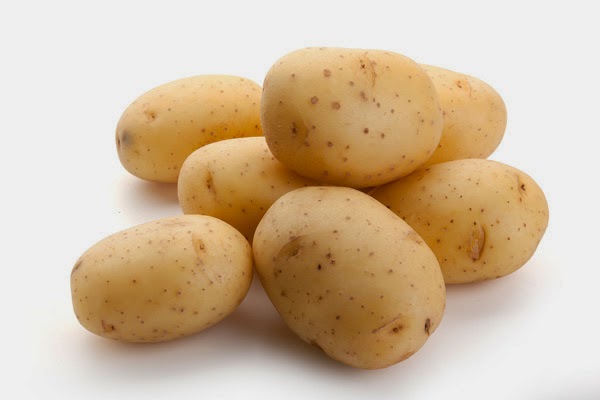 Potatoes are the No. 1 vegetable crop in the United States and the fourth most consumed crop in the world, behind rice, wheat and corn, according to the U.S. Department of Agriculture. Potatoes are often thought of as a comfort food — richly mashed with butter and sour cream or crisply fried in vegetable oil. But when prepared in these ways, they can lead to weight gain, diabetes and heart disease, according to the Harvard School of Public Health. However, when prepared the right way — without butter, cheese or sour cream, for example — these vegetables are somewhat nutritious. Potatoes are low calorie, with a medium-sized baked potato containing only about 110 calories. They are a good source of vitamins C and B6, manganese, phosphorus, niacin and pantothenic acid.

Health Benefits:
Potatoes are stuffed with phytonutrients, which are organic components of plants that are thought to promote health, according to the USDA. Phytonutrients in potatoes include carotenoids, flavonoids and caffeic acid. The vitamin C in potatoes acts as an antioxidant. These substances may prevent or delay some types of cell damage, according to the National Institutes of Health. They may also help with digestion, heart health, blood pressure and even cancer prevention.
Blood pressure:
Potatoes may help lower blood pressure for several reasons. Victoria Jarzabkowski, a nutritionist with the Fitness Institute of Texas at The University of Texas at Austin, said that the fiber found in potatoes can help lower cholesterol by binding with cholesterol in the blood. “After it binds, we excrete it,” she said. Potatoes are also a good source of potassium. “All potatoes are potassium rich,” Jarzabkowski said. “They have even more potassium than a banana, and a lot of it is found in the [potato’s] skin.” She noted that the outer potato peel also contains a good deal of fiber. Potassium is a mineral that helps lower blood pressure, according to the U.S. Food and Drug Administration. Potassium, too, can help lower blood pressure through its actions as a vasodilator (blood vessel widener). Researchers keep discovering more surprising health benefits of eating potatoes. Molecules called kukoamines, which are believed to help lower blood pressure and had previously been found only in goji berries, have been identified in potatoes by researchers at the Institute for Food Research in the U.K. And analysis has revealed that red and Norkotah potatoes boast levels of phenolic content (including flavonoids that help protect against respiratory problems, cardiovascular disease, and certain cancers) that rival even broccoli, spinach and Brussels sprouts

The B6 vitamins in potatoes are critical to maintaining neurological health. Vitamin B6 helps create useful brain chemicals, including serotonin, dopamine and norepinephrin This means that eating potatoes may help with depression, stress and even perhaps attention deficit hyperactivity disorder (ADHD). Potatoes’ high level of carbohydrates may have some advantages, including helping maintain good levels of glucose in the blood, which is necessary to proper brain functioning. A 1995 study published in the American Journal of Clinical Nutrition found that modest increases in glucose could help enhance learning and memory. Potassium, which encourages the widening of blood vessels, also helps ensure your brain gets enough blood.
Immunity:
Vitamin C can help prevent everything from scurvy to the common cold, and potatoes are full of this nutrient, with about 45 percent of the daily recommended intake per medium baked potato, according to the Washington State Potato Commission.
Digestion:
The largest health benefit offered by potatoes is how they can help with digestion due to their high fiber content. Potatoes’ high level of carbohydrates makes them easy to digest, while their fiber-filled skin can help keep you regular.
Heart Health:
Potatoes give your heart plenty of reasons to swoon, due to the fiber content. Jarzabkowski said fiber is associated with clearing cholesterol from blood vessels; vitamins C and B6 help reduce free radicals; and carotenoids help maintain proper heart functioning. Additionally, B6 plays a crucial role in the methylation process, which, among other things, changes the potentially dangerous molecule homocysteine into methionine, a component in new proteins, according to Harvard. Too much homocysteine can damage blood vessel walls, and high levels of it are associated with increased risk of heart attack and stroke.
Weight Gain:
Potatoes are primarily made of carbohydrates and contain very little protein. This makes it an ideal diet for those excessively lean or thin people who desperately want to put on weight. The vitamin content includes vitamin-C and B-complex, which also help in proper absorption of carbohydrates. That is one of the reasons that potatoes make up a large part of the diet of sumo wrestlers, as well as many other athletes who need large energy reserves to burn off in order to compete
Skin care:
According to Organic Facts, vitamin C, vitamin B6, potassium, magnesium, zinc and phosphorous can all help keep skin as smooth and creamy as, well, mashed potatoes. These nutrients are all present in potatoes. Vitamin A may help protect against sun damage, according to a 2004 study in the journal Clinical Cancer Research, and vitamins C and E are well-known for their beauty benefits. They encourage healthy, glowing skin and collagen growth.
Digestion:
According to the Cleveland Clinic, sweet potatoes are a good source of dietary fiber, which helps the body maintain a healthy digestive tract and regulates digestion.
Cancer prevention:
“Orange sweet potatoes have been shown to have anti-carcinogenic properties,” Flores said, and the NIH reports that some studies have suggested that beta-carotene may reduce the risk of breast cancer in premenopausal women and ovarian cancer in postmenopausal women. Purple sweet potatoes may be even more effective than orange sweet potatoes in staving off cancer.
Other Benefits and Cautions: 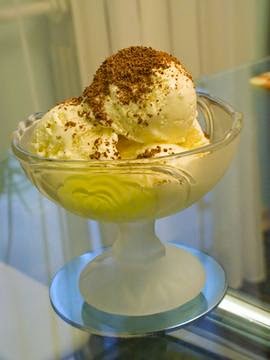 Juice from potatoes is a good treatment for burns, bruises, sprains, skin problems, ulcers, effects of narcotics,  prostate cancer, uterine cancer, and the formation of cysts or tumors. On the other hand, some care also needs to be taken while eating potatoes. Green potatoes are often poisonous, and so are potato leaves and fruits, as they contain alkaloids like solanine, chaconine and arsenic. An overdose of those chemicals could easily prove fatal. Moreover, the glycemic index (in simple words, the energy or sugar content) of potatoes is very high (above 80), so people that are obese, trying to lose weight, or diabetic should avoid eating potatoes. If eaten, potatoes are healthier when baked, rather than raw or fried.
Are potato eyes poisonous?
If the eyes of a potato are not sprouting, they can be eaten. If they are sprouting, the National Institutes of Health recommends cutting off the eyes and their sprouts before eating the potato.
Potato stems, branches, leaves and fruits are toxic, containing alkaloids such as arsenic, chaconine and solanine. Solanine is “very toxic even in small amounts,” according to the NIH.
Poison is also found in green potatoes. The vegetables turn green if they have had too much exposure to light. According to the NIH, you should “never eat potatoes that are spoiled or green below the skin.”
Yams vs. sweet potatoes
Sweet potatoes and yams are often used interchangeably in recipes, but they are quite different and are not even related botanically. Sweet potatoes are members of the morning glory family, while yams are closely related to lilies and grasses. Yams are native to Africa and Asia, and there are more than 600 varieties. Compared to sweet potatoes, yams are starchier and drier.
Health Risks:
Potatoes are fat free, but they are also starchy carbohydrates with little protein. According to Harvard, the carbs in potatoes are the kind that the body digests rapidly and have a high glycemic load. That is, they cause blood sugar and insulin to surge and then dip. This effect can make people feel hungry again soon after eating, which may lead to overeating. The rapid rise in blood sugar can also lead to increased insulin production. On the other hand, potatoes are also a great source of fiber,  and the fiber content helps you feel fuller longer. It is recommended that when planning meals, people should remember potatoes’ carb content. Potatoes should take the place of a grain on the plate. Use it as a carbohydrate source rather than as your only vegetable.
Healthiest Ways to Cook Potatoes 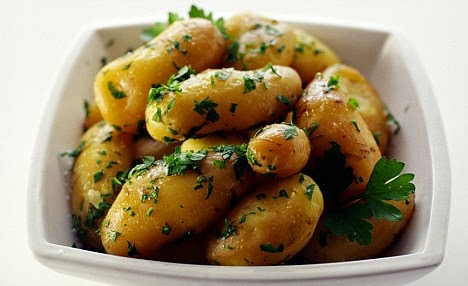 Even when prepared in a healthy way, potatoes can present health problems to individuals with obesity or diabetes. They are high in simple carbohydrates, which can lead to weight gain. The Harvard School of Public Health tracked the diet and lifestyle of 120,000 men and women for about 20 years and found that people who increased their consumption of French fries and baked or mashed potatoes gained more weight over time — as much as 3.4 lbs. every four years.
A.) The best way to eat a potato is in its whole, unprocessed form. Baking a potato is the best way to prepare it, as baking, or microwaving, a potato causes the lowest amount of nutrients to be lost, she said.
B.) The next-healthiest way to cook a potato is through steaming, which causes less nutrient loss than boiling. Cooking a peeled potato in this way results in significant nutrient loss, as the water-soluble nutrients leach out into the water.
C.) In a potato, those water-soluble nutrients include B-complex vitamins, vitamin C, potassium and calcium. As much as 80 percent of a potato’s vitamin C may go down the drain if you boil the vegetable. The same thing can happen with peeled potatoes that are left to soak, a method used to stop darkening. If you use the water from the potato boil as stock, however, you’ll still get some of the nutrients.
However when you cook a potato, try to eat the skin. Kg for kg, the skin contains more nutrients — including the majority of the vegetable’s fiber — than the rest of the potato.
read more