Effect of Alcohol Consumption on Nutrient Absorption and Utilization 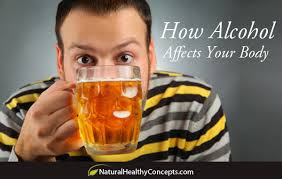 Alcohol and Nutrition:
Many alcoholics are malnourished, either because they ingest too little of essential nutrients (e.g., carbohydrates, proteins, and vitamins) or because alcohol and its metabolism prevent the body from properly absorbing, digesting, and using those nutrients. As a result, alcoholics frequently experience deficiencies in proteins and vitamins, particularly vitamin A, which may contribute to liver disease and other serious alcohol–related disorders. Furthermore, alcohol breakdown in the liver, both by the enzyme alcohol dehydrogenase and by an enzyme system called the microsomal ethanol–oxidizing system (MEOS), generates toxic products such as acetaldehyde and highly reactive, and potentially damaging, oxygen–containing molecules. These products can interfere with the normal metabolism of other nutrients, particularly lipids, and contribute to liver cell damage.
Impairment of Nutrient Digestion and Utilization:
Once ingested, food must be digested (broken down into small components) so it is available for energy and maintenance of body structure and function. Digestion begins in the mouth and continues in the stomach and intestines, with help from the pancreas. The nutrients from digested food are absorbed from the intestines into the blood and carried to the liver. The liver prepares nutrients either for immediate use or for storage and future use.
Alcohol inhibits the breakdown of nutrients into usable molecules by decreasing secretion of digestive enzymes from the pancreas. Alcohol impairs nutrient absorption by damaging the cells lining the stomach and intestines and disabling transport of some nutrients into the blood. In addition, nutritional deficiencies themselves may lead to further absorption problems. For example, folate deficiency alters the cells lining the small intestine, which in turn impairs absorption of water and nutrients including glucose, sodium, and additional folate.
Even if nutrients are digested and absorbed, alcohol can prevent them from being fully utilized by altering their transport, storage, and excretion. Decreased liver stores of vitamins such as vitamin A, and increased excretion of nutrients such as fat, indicate impaired utilization of nutrients by alcoholics.
Alcohol and Energy Supply:
The three basic nutritional components found in food–carbohydrates, proteins, and fats–are used as energy after being converted to simpler products. Some alcoholics ingest as much as 50 percent of their total daily calories from alcohol, often neglecting important foods.
Once alcohol is absorbed through your stomach and small intestine and finally into your cells, it can disrupt the water balance in muscle cells, thus altering their ability to produce adenosine triphosphate (ATP), which is your muscles’ source of energy. ATP provides the furl necessary for your muscles to contract. 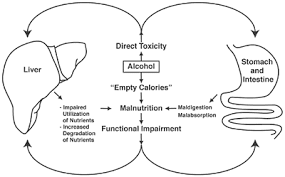 Alcohol also reduces energy sources by inhibiting a process known as gluconeogenesis in which glucose is formed from substances other than glucose. When alcohol is oxidized by alcohol dehydrogenase (an enzyme), it produces an elevation of NADH, which ultimately reduces the amount of a coenzyme that is essential in the production of ATP. This loss of ATP results in a lack of energy and loss of endurance.

Even when food intake is adequate, alcohol can impair the mechanisms by which the body controls blood glucose levels, resulting in either increased or decreased blood glucose (glucose is the body’s principal sugar). In nondiabetic alcoholics, increased blood sugar, or hyperglycemia–caused by impaired insulin secretion–is usually temporary and without consequence. Decreased blood sugar, or hypoglycemia, can cause serious injury even if this condition is short lived. Hypoglycemia can occur when a fasting or malnourished person consumes alcohol. When there is no food to supply energy, stored sugar is depleted, and the products of alcohol metabolism inhibit the formation of glucose from other compounds such as amino acids. As a result, alcohol causes the brain and other body tissue to be deprived of glucose needed for energy and function.
Although alcohol is an energy source, how the body processes and uses the energy from alcohol is more complex than can be explained by a simple calorie conversion value. For example, alcohol provides an average of 20 percent of the calories in the diet of the upper third of drinking Americans, and we might expect many drinkers who consume such amounts to be obese. Instead, national data indicate that, despite higher caloric intake, drinkers are no more obese than nondrinkers. Also, when alcohol is substituted for carbohydrates, calorie for calorie, subjects tend to lose weight, indicating that they derive less energy from alcohol than from food.
The mechanisms accounting for the apparent inefficiency in converting alcohol to energy are complex and incompletely understood, but several mechanisms have been proposed. For example, chronic drinking triggers an inefficient system of alcohol metabolism, the microsomal ethanol-oxidizing system (MEOS). Much of the energy from MEOS-driven alcohol metabolism is lost as heat rather than used to supply the body with energy.
Alcohol and the Maintenance of Cell Structure and Function
Structure:
Because cells are made mostly of protein, an adequate protein diet is important for maintaining cell structure, especially if cells are being damaged. Research indicates that alcohol affects protein nutrition by causing impaired digestion of proteins to amino acids, impaired processing of amino acids by the small intestine and liver, impaired synthesis of proteins from amino acids, and impaired protein secretion by the liver.
Function:
Nutrients are essential for proper body function; proteins, vitamins, and minerals provide the tools that the body needs to perform properly. Alcohol can disrupt body function by causing nutrient deficiencies and by usurping the machinery needed to metabolize nutrients.
Vitamins:
Vitamins are essential to maintaining growth and normal metabolism because they regulate many physiological processes. Chronic heavy drinking is associated with deficiencies in many vitamins because of decreased food ingestion and, in some cases, impaired absorption, metabolism, and utilization. For example, alcohol inhibits fat absorption and thereby impairs absorption of the vitamins A, E, and D that are normally absorbed along with dietary fats. Vitamin A deficiency can be associated with night blindness, and vitamin D deficiency is associated with softening of the bones.
Vitamins A, C, D, E, K, and the B vitamins, also deficient in some alcoholics, are all involved in wound healing and cell maintenance. In particular, because vitamin K is necessary for blood clotting, deficiencies of that vitamin can cause delayed clotting and result in excess bleeding. Deficiencies of other vitamins involved in brain function can cause severe neurological damage.
Minerals:
Deficiencies of minerals such as calcium, magnesium, iron, and zinc are common in alcoholics, although alcohol itself does not seem to affect the absorption of these minerals. Rather, deficiencies seem to occur secondary to other alcohol-related problems: decreased calcium absorption due to fat malabsorption; magnesium deficiency due to decreased intake, increased urinary excretion, vomiting, and diarrhea; iron deficiency related to gastrointestinal bleeding; and zinc malabsorption or losses related to other nutrient deficiencies. Mineral deficiencies can cause a variety of medical consequences from calcium-related bone disease to zinc-related night blindness and skin lesions.
Alcohol and Memory:
Memory formation is a complex process that takes a long time. Many of your memories are solidified when you are not thinking about the material. In fact, much of memory formation occurs while you sleep.
Alcohol affects your sleep cycle by disrupting the sequence and duration of normal sleep, reducing your brain’s ability to learn and retain information. Even drinking up to six hours before you go to sleep will negatively affect your sleep cycle. For example, if you drink after a day of classes, studying, or learning new plays, you are not getting 100 percent out of your efforts because of the effects of the alcohol you drank.
http://pubs.niaaa.nih.gov/publications/arh27-3/220-231.htm
http://pubs.niaaa.nih.gov/publications/aa22.htm
http://studenthealth.ucsd.edu/partynutrition.shtml
read more