Use of Paw-Paw Leaves for Treatment of Typhoid Fever 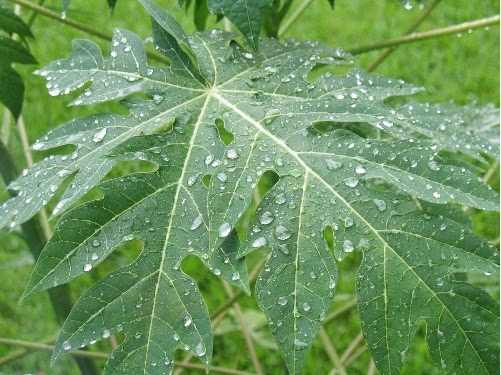 Scientists have suggested that pawpaw leaves may serve as a cheap source of antimicrobial compound for the treatment of typhoid fever.
In a study, which looked at the effects of its extracts on germs that cause typhoid fever, the scientists corroborated the antibacterial effect of water and methanol extracts of pawpaw leaves against Salmonella typhi, the causative agent of typhoid fever.
An Overview of Typhoid Fever:
Typhoid fever, also known simply as typhoid, is a common worldwide bacterial disease transmitted by the ingestion of food or water contaminated with the faeces of an infected person, which contain the bacterium Salmonella typhi.
The bacteria that cause typhoid fever spread through contaminated food, drink, or water. The germs after having access into the body travel into the intestines and then into the bloodstream, where they can get to the lymph nodes, gallbladder, liver, spleen, and other parts of the body. A few people can become carriers of Salmonella typhi and continue to release the bacteria in their stools for years, spreading the disease.

Typhoid infection leads to symptoms such as headache, abdominal pain, fever and diarrhoea. The symptoms are alleviated with the help of antibiotic medications. Typhoid fever, in some cases, may result in serious life-threatening complications.
Currently, typhoid fever is a problem in the African continent with limited success of treatment with antimicrobial agents, thereby necessitating the search for other agents in form of herbal product for curing this disease.
Pawpaw leaf extract is used in treating malaria caused by the parasite, Plasmodium specie. It is one of the cheapest medicinal leaves that are easily found within the local environment and its leaves are available all through the year.
In a study, the methanolic extracts of the plant showed the highest bactericidal effect on the test isolates at low concentration of 4.5mg/ml. Also, the ethanolic extracts of the leaves had a bactericidal effect on the test isolates at concentration of 6.0m/ml whereas the hot aqueous solution showed susceptibility at 9.0mg/ml.
The researchers, who found that the bacterium Salmonella typhi was only susceptible at higher concentrations, observed that the crude extracts of the plant contain active principles that inhibited the growth of the test organism.
The 2014 study was published in the Journal of Environmental Science, Toxicology and Food Technology. It involved Efunwole O.O; Adetuberu I.A: Oladipupo O.A; and Abejoye O.A, all from the Osun State Polytechnic, Iree.
Many medicinal plants have been reported to contain some active chemicals which are toxic and inhibitory to some micro-organism causing diseases in human. Traditional medicine has employed the use of lemon grass as a natural remedy to thyroid fever.
Called Kooko oba in Yorubaland, Isauri (in Hausa) and Acharaehi (in Igbo), lemon grass has been used for centuries for useful properties including antibacterial, antifungal and fever-reducing effects. In one test-tube investigation, published in the medical journal Microbios in 1996, researchers demonstrated that lemon grass was effective against 22 strains of bacteria and 12 types of fungi. Scientific research has also supported the herb’s reputation as an analgesic and sedative.
To treat typhoid fever, it is recommended that lemon grass leaf be boiled in water for about half an hour with whole lime, grape fruits, unripe pawpaw fruits, unripe pineapples, cut garlic and bark of Alstonia bonnei (awun in Yoruba; cheesewood/pattern wood in English).
In addition, peeled raw garlic, a natural antibiotic are suck like a lolly for 20 minutes or so. It is continued for days. If the clove is large, this could be cut it into small pieces.
Lemons and honey are also good natural remedies. The entire lemon or lime is squeezed and its juice is added to hot or cold water and honey to taste. Lemons and limes are natural disinfectants and will alkalize the intestine.
In recent past, Vitex doniana (root), Cassia tora (Leaf), Alstonia boonei (bark), Stachytarpheta jamaicensis (leaf), and pawpaw (leaf) have been claimed by traditional medical practitioners in Ebonyi State to be effective for the treatment of fevers, particularly typhoid fever.

Vitex doniana is commonly referred to as Black plum, dinya in hausa and ori nla in Yoruba. Cassia tora is called ochigichi in igbo and ako rere in Yoruba. Alstonia boonei is known as Ahun in Yoruba, Egbu-ora in Igbo and Ukhu in Edo. In Igbo, Stachytarpheta jamaicensis is referred to as Albaka.
In a study substantiating the efficacy of the recipe, the researchers reported that V. doniana, A. boonei, Cassia tora and S. jamaicensis showed anti-typhoid activity against S. typhi strains when these were tested at different rates. The ethanol extracts of V. doniana and A.boonei were the most active inhibiting 9(90 per cent) and 8(80 per cent) of test organism.
They wrote: “Our result showed that V. doniana and A. boonei showed the highest anti-typhoid activity with ethanol extract; A. boonei, S. jamaicensis and C. tora showed the highest activity with hot water extract and A. boonei, C. tora and V. doniana showed the same activity with cold water extract.
“In comparison with the control antibiotics (chloramphenicol and ciprofloxacin), the activity of V. doniana and A. boonei is the most encouraging among the plant extracts tested.
Writting in the 2011 edition of the African Journal of Pharmacy and Pharmacology, the researchers stated that “The result of the present investigation emphasises the usefulness of V. doniana, A. boonei, S. jamaicensis and C. tora in the treatment of typhoid fever and the need to enhance its exploitation in this regards.
“Also the remarkable anti-typhoid activity observed with V. doniana and A. boonei is of particular urgent interest considering the rate of multi-drug resistance strains of S. typhi and the fact that typhoid fever ranks high as one of the most common ailments among all age groups in the under- developed countries.
CULLED FROM: THE TRIBUNE NEWSPAPER
read more