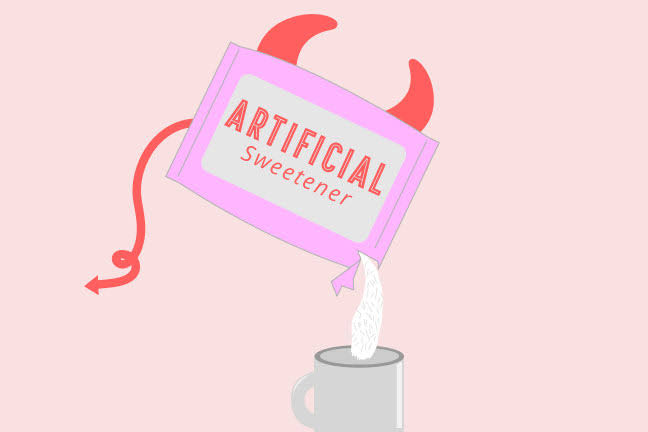 There seems to be a lot of debate out there about artificial sweetners.

Some research says its good for weightloss and as a good substitute for table sugars, while some say it would increase the risk of  cancer and also increase blood sugar level.

Well, lets dive into this troubled waters and see what we can pull out of it shall we?

What Are Artificial Sweeteners?

Artificial sweeteners, or sugar substitutes, are chemicals added to some foods and beverages to make them taste sweet.

They tend to provide a taste that seems 1,000 times sweeter than regular sugar.

Although some sweeteners contain calories, the amount needed to sweeten products is so small that you end up consuming almost no calories.

They are mostly used in beverages and drinks since they provide zero calories.

How Do Artificial Sweeteners Work?

The surface of your tongue is covered by many taste buds. Each taste bud contains several taste receptors that detect different flavors ( sweet, sour, salty).

Each time you eat, the different food molecules contact your taste receptors.

When the food molecule meets with the receptor, it (receptor) sends a signal to your brain, allowing you to identify the taste

For example, the sugar molecule fits perfectly into the taste receptor for sweetness, like a missing pixzle piece  allowing your brain to identify the sweet taste.

The molecules of artificial sweeteners are similar enough to sugar molecules that they fit on the sweetness receptor.

However, they are generally too different from sugar for your body to break them down into calories. This is why they have a sweet taste without the added calories.

Reason why they won’t provide calories (energy) is because your body cannot break them down.

What Are the Names of Artificial Sweeteners?

The following artificial sweeteners are allowed for use in the US and/or the European Union:

Cyclamate: 50 times sweeter than table sugar. Cyclamate is suited for cooking and baking. However, it’s been banned in the US since 1970.

Neotame: 13,000 times sweeter than table sugar. Neotame is suited for cooking and baking and known under the brand name Newtame.

Neohesperidin: 340 times sweeter than table sugar. It is suited for cooking, baking and mixing with acidic foods. It is not approved for use in the US.

There’s also a new guy om the block called ‘allulose’ made from grains.

Because they taste sweet but lack the calories found in other sweet-tasting foods, they’re thought to confuse the brain into still feeling hungry after consumption.

Additionally, some scientists think you’d need to eat more of an artificially sweetened food, compared to the sugar-sweetened version, in order to feel full; well, who knows?

Although these theories are plausible, there’s mo back up claim whatsoever to them.

Well, we have seen that artificial sweetners do not contain calories at all, so obvioulsy they wont increase your risk of gaining extra pounds.

But once they increase your sugar cravings, its better you stick to water than that can of soda.

Artificial sweetners would reduce your intake of refined sugar, thereby making it easy for your insulin levels to work. It doesnt have any adverse effects on your glucose yes, but it is better you seek advice from your dietitan or doctor before using them.

The health of your gut totally determines if you would be vulnerable to certain illness.

Once your gut is not happy with you, you are at risk of poor blood sugar control,  weakened immune system, and disrupted sleep.

Some studies suggest that selected sweetners could disrupt the health of your gut by affecting the balance of gut bacteria.

Apart from cyclamate which was banned in 1970 in America, no other other study has linked artificial sweetners with cancer.

Unlike sugars, artificial sweetners do not react with bacteria in your mourh to form acids. So, they dont affect your dental health negatively.

Safety and side effects

Artificial sweetners are safe to use but should not be consumed by individuals with phenylketonuria or those allergic to sulfonamides.

Take home Message for all

The use of artificial sweetners pose no threats to the health if used as alternatives to sugars.

Some risks attatched to it might be severe or different in individuals, so its best  to seek advice before selecting a sweetner.