POWER DOWN A NOTCH

Caffeine is the main ingredient in energy drinks, and the one that causes most health concerns. A single can contains as much as 500 mg of caffeine – the equivalent to five cups ofcoffee.
Although some types of coffee can have caffeine levels comparable to energy drinks, coffee is typically consumed hot and consequently more slowly. Further, the proliferation of new brands of energy drinks has included some brands, which contain extreme caffeine levels much higher than mainstream brands as they try to establish themselves in the market.
Studies claim that excess caffeine intake can lead to numerous health problems, including hypertension, heart palpitations, nausea and vomiting, psychosis, convulsions and even death.
Earlier this year,Medical News Today reported on a study claiming both sports drinks and energy drinks maylead to unhealthy behaviors in adolescents.
What should be done to reduce the harmful effects of energy drink consumption?
The authors suggest a number of strategies that they say policy makers should consider in order to reduce the occurrence of adverse effects of energy drink consumption.
Firstly, they state that a maximum limit should be set for the amount of caffeine allowed in one serving of an energy drink. “While the majority of energy drinks that control the market do not contain excessive amounts of caffeine, there are an increasing number of energy drinks entering the market that have caffeine concentrations well above those of mainstream energy drinks,” they note.
Direct Health Effects of Energy Drink Consumption
1.) Cardiac Arrest: 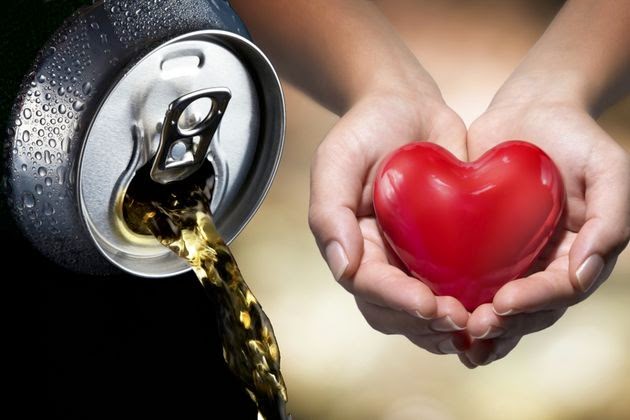 While our Death by Caffeine Calculatorcan show people how many energy drinks at one time would be lethal, this formula doesn’t apply to everyone. Those with underlying heart conditions have gone into cardiac arrest after just a few energy drinks. Before drinking energy drinks or caffeine, be sure to know your heart’s health.
2.) Insomnia:
Energy drinks do a good job of keeping people awake, but when abused, they can cause some people to miss sleep all together. This lack of sleep causes impaired functioning and can be dangerous to drive or perform other concentration heavy tasks.
3.) Type 2 Diabetes:
Because many energy drinks are also very high in sugar, they can eventually wear out the insulin producing cells of the pancreas, which leads to type 2 diabetes.
4.) Drug Interaction:
Some of the ingredients in energy drinks can interact with prescription medications especially medications taken for depression.
5.) Addiction:
People can become addicted to caffeine and energy drinks. This can lead to lack of functioning when unable to have the energy drink or a financial stress from having to buy several energy drinks daily.
6.) Risky behavior:
There was a study published in The Journal of American College Health which showed that teens are more likely to take dangerous risks when high on caffeine. This could result in injury or legal trouble.
Risk of Intoxication

More than 35mg of Niacin (B3) can cause flushing of the skin. Intake of 3000mg or more can result in liver toxicity.
More than 100mg of B6 can cause sensory nerve problems (burning sensation) or skin lesions.
L-Theanine:

This amino acid is derived from green tea and many energy drinks and shots have begun putting “green tea extract” in their products. It produces a different type of alertness than caffeine and there hasn’t been any scientificevidenceof it causing adverse side effects. Some have reported feeling light-headed when consuming a dose of more than 300mg of L-Theanine.
What happens when energy drinks are combined with alcohol? 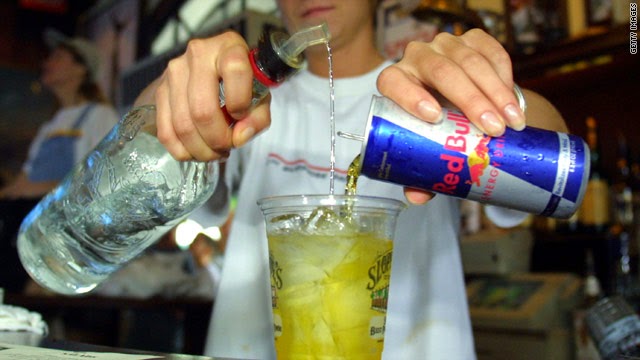 Energy drinks are also used as mixers with alcohol. This combination carries a number of potential dangers:
A.) Since energy drinks are stimulants and alcohol is a depressant, the combination of effects may be dangerous. The stimulant effects can mask how intoxicated you are and prevent you from realizing how much alcohol you have consumed. Fatigue is one of the ways the body normally tells someone that they’ve had enough to drink.
B.) The stimulant effect can give the person the impression they aren’t impaired. No matter how alert you feel, your Blood Alcohol Concentration (BAC) is the same as it would be without the energy drink. People will misperceive their ability to perform complex tasks like driving or crossing a busy road. Once the stimulant effect wears off, the depressant effects of the alcohol will remain and could cause vomiting in your sleep or respiratory depression.
C.) Research has found that people drink more and have higher BACs when they combine alcohol and caffeine.
Both energy drinks and alcohol are very dehydrating (the caffeine in energy drinks is a diuretic). Dehydration can hinder your body’s ability to metabolize alcohol and will increase the toxicity, and therefore the hangover, the next day.
read more