Risks of Drinking too Much Water 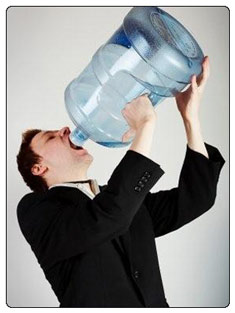 Experts now warn that drinking eight glasses of water a day is not good for you after all – and could be harmful. They say that scientific claims behind long-standing government guidelines are worse than ‘nonsense’. The NHS – along with leading doctors and nutritionists – advises the public to drink about 1.2 litres (or two-and-a-half pints) of water per day. Drinking excessive amounts can also lead to loss of sleep as people have to get up in the night to go to the toilet, and other studies show it can even cause kidney damage, instead of preventing it.

Causes of Overhydration?
Overhydration caused by drinking too much water can occur both consciously and unconsciously. For example, a person may drink too much water during exercise. Some medications can also cause dry mouth and cause an increase in thirst. Increased thirst can also be caused by uncontrolled diabetes. Psychiatric conditions such as schizophrenia (primary polydipsia or psychogenic polydipsia) can also cause compulsive water drinking.
Overhydration caused by water retention is often the result of medical conditions, such as:
*liver disease (cirrhosis)
*kidney problems
*congestive heart failure
*syndrome of inappropriate anti-diuretic hormone (SIADH)

A 2005 study in the New England Journal of Medicine found that close to one sixth of marathon runners develop some degree of hyponatremia,or dilution of the blood caused by drinking too much water.

Hyponatremia, a word cobbled together from Latin and Greek roots, translates as “insufficient salt in the blood.” Quantitatively speaking, it means having a blood sodium concentration below 135 millimoles per liter, or approximately 0.4 ounces per gallon, the normal concentration lying somewhere between 135 and 145 millimoles per liter. Severe cases of hyponatremia can lead to water intoxication, an illness whose symptoms include headache, fatigue, nausea, vomiting, frequent urination and mental disorientation.

In humans the kidneys control the amount of water, salts and other solutes leaving the body by sieving blood through their millions of twisted tubules. When a person drinks too much water in a short period of time, the kidneys cannot flush it out fast enough and the blood becomes waterlogged. Drawn to regions where the concentration of salt and other dissolved substances is higher, excess water leaves the blood and ultimately enters the cells, which swell like balloons to accommodate it. Most cells have room to stretch because they are embedded in flexible tissues such as fat and muscle, but this is not the case for neurons. Brain cells are tightly packaged inside a rigid boney cage, the skull, and they have to share this space with blood and cerebrospinal fluid, explains Wolfgang Liedtke, a clinical neuroscientist at Duke University Medical Center. “Inside the skull there is almost zero room to expand and swell,” he says.

How Is Overhydration Treated? 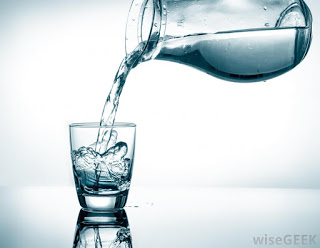 Treatment for overhydration depends upon the severity of the symptoms and the underlying reason. It may include:
*cutting back on fluid and salt intake
*diuretics to increase how much urine is produced
*medications to reduce symptoms such as nausea, seizures, and headache
*treatment of underlying medical conditions
read more