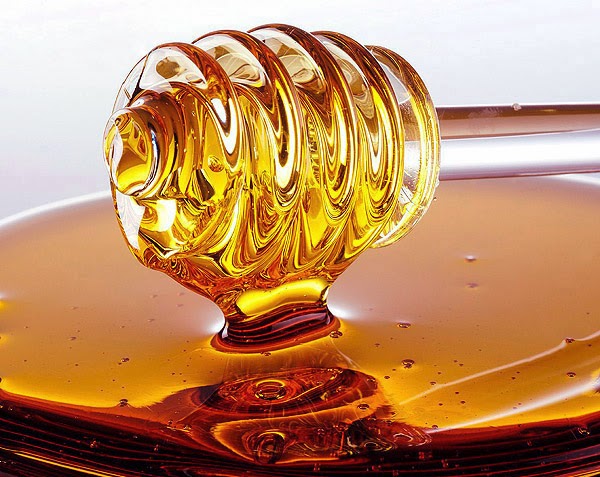 Many of us know honey as the “harmless elder brother of sugar, hence making it a worthy substitute. True to a large extent, honey has been proven to be a “functional food”which means it is a natural food with health benefits. It contains naturalantioxidants, enzymes and minerals includingiron,zinc,potassium,calcium,phosphorous, magnesium and selenium.Vitamins found in honey includevitamin B6, thiamin, riboflavin, pantothenic acid and niacin. In addition, the nutraceuticals contained in honey help neutralize damaging free radical activity.One tablespoon of honey contains 64 calories, yet it has a healthy glycemic load around 10 for 1 Tbsp, which is a little less than a banana. and does not cause a sugar spike and elevated insulin release like white sugar. Although honey is an affordable food, bees spend thousands of hours collecting pollen from around two million flowers to make one pound of pure honey.
Honey also has plenty therapeutic applications which comprises the main body of this article;
Honey Makes Excellent Cough “Medicine”

The World Health Organization (WHO) lists honey as a demulcent, which is a substance that relieves irritation in your mouth or throat by forming a protective film.Research shows honey works as well as dextromethorphan, a common ingredient in over the counter cough medications, to soothe cough and related sleeping difficulties due to upper respiratory tract infections in children.

Honey was a conventional therapy in fighting infection up until the early 20th century, at which time its use slowly vanished with the advent of penicillin. Now the use of honey in wound care is regaining popularity, as researchers are determining exactly how honey can help fight serious skin infections.
Honey has antibacterial, antifungal, and antioxidants activities that make it ideal for treating wounds.Manuka honey is made with pollen gathered from the flowers of the Manuka bush (a medicinal plant), and clinical trials have found this type of honey can effectively eradicate more than 250 clinical strains of bacteria, including resistant varieties such as:
Compared to other types of honey, Manuka has an extra ingredient with antimicrobial qualities, called the Unique Manuka Factor (UMF). It is so called because no one has yet been able to discover the unique substance involved that gives it its extraordinary antibacterial activity.
Honey releases hydrogen peroxide through an enzymatic process, which explains its general antiseptic qualities, but active Manuka honey contains “something else” that makes it far superior to other types of honey when it comes to killing off bacteria.
That being said, research shows that any type ofunprocessedhoney helped wounds and ulcers heal. In one study, 58 of 59 wounds showed “remarkable improvement following topical application of honey.”

Honey diluted with a bit of warm water was shown to significantly improve seborrheic dermatitis, which is a scalp condition that causes dandruff and itching. After applying the solution every other day for four weeks, “all of the patients responded markedly.” According to the researchers:

“Itching was relieved and scaling was disappeared within one week. Skin lesions were healed and disappeared completely within 2 weeks. In addition, patients showed subjective improvement in hair loss.”

A healthy, whole-food diet and proper sleep is the best recipe for boundless energy, but if you’re looking for a quick energy boost, such as before or after a workout, honey can suffice. This is particularly true for athletes looking for a “time-released fuel” to provide energy over a longer duration.

Locally produced honey, which will contain pollen spores picked up by the bees from local plants, introduces a small amount of allergen into your system. Theoretically, this can activate your immune system and over time can build up your natural immunity against it.
The typical recommendation is to take about a teaspoon-full of locally produced honey per day, starting a few months PRIOR to the pollen season, to allow your system to build up immunity. And the key here is local.
This approach only works because it has pollen of local plants you may be allergic to. Honey from other parts of the country simply won’t work. While research on this has yielded conflicting results, one study found that, during birch pollen season, compared to the control group, the patients using birch pollen honey experienced:
Interestingly enough, there were few differences between the two honey groups (those who took regular honey, versus those who took honey that contained birch pollen.) However, the birch pollen honey group used less histamines than those who used regular honey.
6. Honey as a Sleep Aid
Honey promotes restorative sleep as it slowly releases the glycogen needed for essential bodily functions during sleep. Adding honey to milk at bedtime helps the body release melatonin into the brain which is necessary for deep sleep.
Melatonin also boosts immunity and helps rebuild tissue during periods of rest. Poor sleep, by comparison, has been shown to be a risk factor for hypertension, obesity, Type 2 diabetes, heart disease, stroke and arthritis. As honey is a proven sleep aid, it naturally lowers the risk of all these health problems.

Honey is a humectant, which means it attracts and retains moisture, making it an ideal addition to moisturizers, shampoos, and conditioners. Along with its antimicrobial properties, honey makes a wonderful addition to homemade personal care products. The National Honey Board has a few you can try out for yourself:
The Organic Consumers Association has also published this simple honey lemon cough syrup that’s useful to keep on hand during the winter months:

Honey Lemon Cough Syrup
1.) Lemon helps promote health by quickly alkalinizing your body, and honey will kill most bacteria while soothing your throat. This is a perfect choice for a quick cough remedy.
2.) Put a pint of raw honey in a pan on the stove on VERY low heat (Do not boil honey as this changes its medicinal properties).
3.) Take a whole lemon and boil in some water in a separate pan for 2-3 minutes to both soften the lemon and kill any bacteria that may be on the lemon skin.
4.) Let the lemon cool enough to handle then cut it in slices and add it to the pint of honey on the stove.
5.) Let mixture cook on warm heat for about an hour.
6.) Then strain the lemon from the honey making sure all lemon seeds are removed.
7.) Let cool, then bottle in a jar with a lid and store in the refrigerator.
This syrup will keep for 2 months in the refrigerator. To soothe a cough, take 1/2 teaspoon for a 25 lb. child and 1 teaspoon for a 50 lb. child, about 4 times a day, or as often as needed. Adults can take 1-tablespoon doses.

Honey Should Be Consumed Only in Moderation
Proverbs 25:16 says “Do you like honey? Don’t eat too much, or it will make you sick!” Although honey is one of the healthiest sweeteners, it still should be used in moderation.

Honeyhas many healthy attributes, but it is also high in fructose, averaging around 53 percent. Each teaspoon of honey has nearly four grams of fructose, which means it can exacerbate pre-existing insulin resistance and wreak havoc on your body if consumed in excess. So when consuming honey, carefully add the total grams of fructose (including fruits) that you consume each day, and stay below25 grams of total fructose per day.
Further Research
Further research into the health benefits of honey include the prevention of chemotherapy induced neutroopenia, and improved cognitive function for mental performance and memory. Other recent scientific reports linking honey to health include research suggesting that taking honey with calcium supplements boost bone strength.

Good-quality honey offers several topical wound-care benefits that can explain some of its success as a remedy for herpes sores:
In one study, 16 adult subjects with a history of recurrent labial and genital herpes attacks used honey to treat one attack, and a commonly prescribed antiviral drug, Acyclovir cream, during another. (It’s important to realize that neither the drug nor the honey will actually cure genital herpes. They only treat the symptoms.)
Interestingly, honey provided significantly better treatment results. For labial herpes, the mean healing time was 43 percent better, and for genital herpes, 59 percent better than acyclovir. Pain and crusting was also significantly reduced with the honey, compared to the drug. Two cases of labial herpes and one case of genital herpes remitted completely with the honey treatment, whereas none remitted while using acyclovir.

Interractions
*Keep in mind, though, that if you have insulin resistance (i.e. if you are taking drugs for high blood pressure, cholesterol,diabetes, or if you’re overweight) you’d be better off avoiding all sweeteners, including honey, sinceanysweetener can decrease your insulin sensitivity and worsen your insulin resistance. If you’re healthy, however, eating raw honey in moderation could provide many of the benefits listed above.
*Never Give Honey to an Infant
Honey is natural and considered harmless for adults. But pediatricians strongly caution against feeding honey to children under 1 year old.That’s because of the risk of botulism. The spores of the botulism bacteria are found in dust and soil that may make their way into honey. Infants do not have a developed immune system to defend against infection, says Jatinder Bhatia, MD, a Georgia neonatologist who heads the American Academy of Pediatrics’ Committee on Nutrition.
Hope this has served as a well stuffed reference point for any information concerning this sweet stuff. Enjoy!