Nutritional Information and Demerits of Nzu 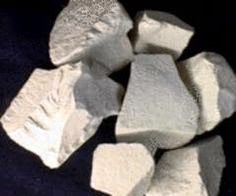 In Nigeria, pregnant and breast feeding women patronize it themost. This chalk which is natural and made up of fossilizedseashells may be prepared artificially from clay and mud.This combination may then be mixed with other ingredients including sand, wood ash and sometimes salt. The resulting product is molded and then heated to produce the final product. Different names have been ascribed to this chalk depending on which part of the world it is found. It is known as La Craie or Argile in French, Nzu and Ndom by the Igbo and Efiks/Ibibios respectively of Nigeria, and Mabele by the Lingala of Congo. It is sold in blocks, pellets and powder forms. While not many people know this, local chalk is composed of Aluminum silicate hydroxide from the kaolin clay group with the possible formula: Al2 Si2 O5 OH4. This has been tested to contain lead and arsenic. Exposure to lead can result in a number of harmful effects, and a developing child is particularly at risk of effects on the brain and nervous system. Arsenic is a carcinogen, and excessive long-term exposure to it has been associated with a range of adverse health effects, including cancers of the urinary bladder, lung and skin.

Furthermore, a new study on Kenyan pregnant women’seating habits shows that consumption of non-food items impacts on their children’s learning ability. The study shows a correlation between once bright children who later become underachievers in school, “yet they possess such great abilities and talents” and factors related to birth or pregnancy.Titled, Impact of “pica” (non-foods) practice among pregnant mothers on cognitive intelligence [learning ability] of the child, the study cautions against eating items that have no food value, which can later affect the full development and growth of the child. The research which is the first ever to be conducted in Kenya to ascertain effects of ‘pica’, (the practice by mothers to consume non-food items during pregnancy, such as soil, matches and chalk), shows up to 77.9 per cent of pregnant women in the country engage in the habit. The President of the African Council for Gifted and Talented , Humphrey Oborah called for enhanced education and sensitization to parents and teachers on the adverse effects of pica on overall health and growth.

The Texas Department of State Health Services and FDA notified healthcare professionals and consumers, especially pregnant or breastfeeding women, to avoid consuming a product called “Nzu”, taken as a traditional remedy for morningsickness, because of the potential health risks from high levels of lead and arsenic, noted on laboratory analysis by Texas DSHS. Exposure to lead can result in a number of harmful effects, anda developing child is particularly at risk of effects on the brain and nervous system. Arsenic is a carcinogen, and excessive long term exposure to it has been associated with a range of adverse health effects, including cancers of the urinary bladder, lung and skin. Nzu, which is sold at African specialty stores is also called Calabash clay, Calabar stone, Mabele, Argile and La Craie. It generally resembles balls of clay or mud and is usually sold in small plastic bags with a handwritten label identifying it as “Nzu” or “Salted Nzu.”

Over-Looked Benefits of “Nzu”; Well, Cos it’s gotta DO SOMETHING.
Eating chalk is not recommended, but kaolin clay may have overlooked benefits. The digestive pharmaceutical Kaopectate was formulated using kaolinite as its main ingredient, to aid in suppressing diarrhoea and reducing toxic effects in the digestive system. Similar to many pharmaceuticals, the same actions that may contribute to constipation and complications when taken in excess display therapeutic benefits when taken in timesofneed.
*Given the energetic costs of diarrhea and its potentially devastating effects whened with dehydration andmalnutrition in children, the ability of clay to act as an anti- diarrheal is notable. In the same parts of Africa where pregnant women eat clay, large percentages of children are regular clay eaters, sometimes as many as 70%. For these children, the internal use of clay may both prevent diarrhea and enable the body’s ability to digest valuable nutrients in food consumed alongside clay.

*Properties of Clay and Detoxification

Though the study of clay consumption has revealed the
potential for digestive and nutritional benefits, scientists believe the most conclusive evidence points to detoxification as a primary benefit of clay eating throughout human history. Its use appears to be one borrowed from and shared by numerous animal species, attesting to its practice not as an anomaly or aberrant behavior but instead a true adaptive practice contributing to survival and evolution. One example from the animal kingdom is the use of clays by animal species that regularly scavenge for a wide variety of foods, often of varying toxicity. Researchers discovered that the ingestion of clays by such species, among them birds, parrots, rats and primates, enables a diverse diet without suffering the toxic effects of substances consumed. The chemical structure of earthen clays determines their suitability as a detoxicant. Their crystalline shape includes hexagonal networks of silicon-oxygen tetrahedrons, giving them a large surface area with which to bond with potential toxins. In addition, hydroxyl ions and colloidal properties within their structure promote the ability to bind and exchange metals as well as adsorb water and other organic compounds. In cultures across continents, anthropologists and mineralogists have documented and substantiated the use of clays to reduce bioavailability of plant toxins from foods and make them more edible. These practices are known to have been used by native cultures in present-day Bolivia, Peru and Arizona to eliminate the bitterness of wild potatoes and prevent stomach pains and vomiting, evidenced in the laboratory by the clay’s ability to adsorb glycoalkaloids found in the potato species

The reason for eating these weird things by pregnant women is called PICA, most times nausea follows the pica and they want to curb the effect with nzu, it’s more advisable to curb pica with low sugar menthol sweets or gums, sugar alcohols like sorbitol and xylitol which are a healthier options to nzu.