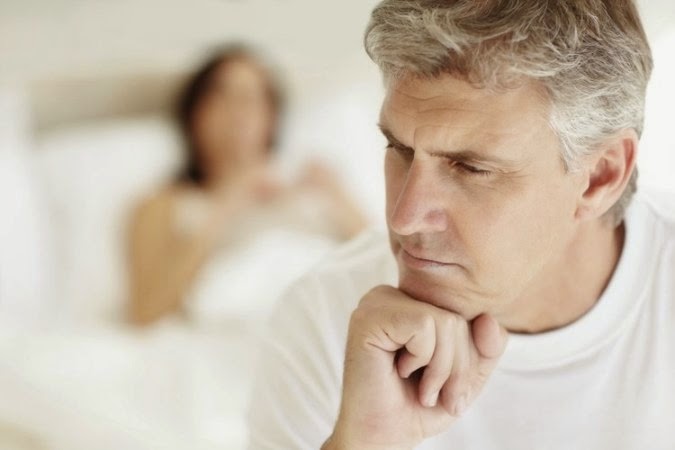 Andropausealso known asmale menopause,it is the result of a gradual drop in testosterone which is an androgen. The condition “andropause” is currently not recognized by theWorld Health Organization. When andropause occurs, it is considered to be a deficiency state in which the hormone testosterone goes below the normal range for an aging male.
Andropause is caused by the reduction of hormonestestosteroneanddehydroepiandrosteronein middle-aged men. Testosterone assists the male body in building protein and it is crucial for normal sexual drive and stamina. Testosterone also contributes to several metabolic functions including bone formation, and liver function. Adropause is also associated with a decrease inLeydig cells.A steady decline in testosterone levels with age (in both men and women) is well documented.Some men develop depression, loss of sex drive, erectile dysfunction and other physical and emotional symptoms when they reach their late 40s to early 50s.

Other symptoms common in men this age are:
*hot flushes
*mood swings
*loss of muscle mass
*fat redistribution, such as developing a large belly or “man boobs” (gynaecomastia)
*tiredness and a general lack of enthusiasm or energy
*increased sweating
*poor concentration and short-term memory
*irritability
These symptoms can interfere with everyday life and happiness, so it’s important to find the underlying cause and work out what can be done to resolve it.
A testosterone deficiency that develops later in life (also known as late-onset hypogonadism) can sometimes be responsible for these symptoms, but in many cases the symptoms are nothing to do with hormones.

Testosterone is a vital sex hormone that plays an important role in puberty. In men, testosterone not only regulates sex drive (libido), it also helps regulate bone mass, fat distribution, muscle mass and strength, and the production of red blood cells and sperm. Testosterone isn’t exclusively a male hormone—women produce small amounts as well.
As men age, they often produce somewhat less testosterone, especially compared to years of peak testosterone production during adolescence and early adulthood. Normal testosterone production ranges widely, and it is unclear what amount of decline or how low a level of testosterone will cause adverse effects.
In recent years, the popular press has increasingly reported about “male menopause,” a condition supposedly caused by diminishing testosterone levels in aging men. There is very little scientific evidence that this condition, also known as andropause or viropause, exists. The likelihood that an aging man will experience a major shutdown of testosterone production similar to a woman’s menopause is very remote. In fact, many of the changes that take place in older men often are incorrectly attributed to decreasing testosterone levels. For instance, some men experiencing erectile difficulty (impotence) may be tempted to blame it on lowered testosterone, but many cases of erectile problems are due to circulatory problems.
For men whose bodies make very little or no testosterone, testosterone replacement may offer benefits. FDA-approved testosterone drugs come in different forms, including patches, injections, and topical gels. Men whose testes (the reproductive glands that make testosterone and sperm) have been damaged or whose pituitary glands have been harmed or destroyed by trauma, infections, or tumors may also be prescribed testosterone. Treatment with testosterone drugs can help men with exceptionally low testosterone levels maintain strong muscles and bones and increase their sex drive. It is unclear if men who are at the lower end of the normal range for testosterone production would benefit from treatment.
More research is needed to learn what effects testosterone drug therapy may have in healthy older men without these extreme deficiencies. NIA is investigating the role of testosterone therapy in delaying or preventing frailty and helping with other age-related health issues. Results from preliminary studies involving small groups of men are inconclusive. Specifically, it remains unclear to what degree testosterone supplements can help men maintain strong muscles and sturdy bones, sustain robust sexual activity, or sharpen memory.
There are also concerns about the long-term, harmful effects that testosterone drugs might have on the aging body. Most epidemiological studies suggest that higher natural levels of testosterone are not associated with a higher incidence of prostate cancer—the second leading cause of cancer death among men. However, scientists do not know if taking testosterone drugs increases men’s risk for developing prostate cancer or promoting the growth of an existing tumor. There is also uncertainty about effects of testosterone treatment on the cardiovascular system in older men, especially men with mobility limitations and other diseases. Future studies will address this issue to ensure that older men receiving testosterone treatment are not exposed to unnecessary risks.
The bottom line: Your GP may also order a blood test to measure your testosterone levels. If the results suggest you have a testosterone deficiency, you may be referred to anTreating the depression aspect of male menopause can make the most significant impact on improving the condition and your quality of life. Treatment can include antidepressants, therapy, and lifestyle changes. The most common type of treatment for male menopause is making healthier lifestyle choices. These include:
1.) Eating a healthy diet
2.) Regular exercise
3.) Getting adequate sleep
4.) Reducing your stress
These health tips benefit all men, but those experiencing symptoms of male menopause could see a dramatic change in their overall health.
Hormone replacement therapy is another treatment option, but it’s very controversial. Like performance-enhancing steroids, synthetic testosterone can have damaging side effects, including the potential to worsen prostate cancer. If your doctor suggests hormone replacement therapy, weigh all of the positives and negatives before making your decision.Testosterone replacement therapy (TRT) is enveloped in controversy. It has helped some men, but TRT has risks, especially for men with prostate cancer and heart disease. And, TRT may not improve symptoms. More studies need to be done to determine the safety and efficacy of TRT.
There are claims that herbal supplements can relieve symptoms. Not one of these supplements has been proven to be safe and effective for age-related low testosterone.
read more