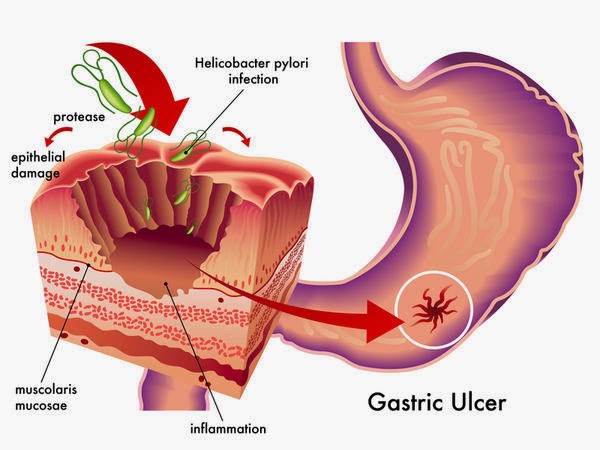 DIETARY MANAGEMENT
Adjusting your diet will not cure stomach ulcers, but eating certain foods and avoiding others can help ease symptoms and may help with the healing process.
If you have peptic ulcer disease, proper treatment relies on modern medicine. But diet and stress reduction are also powerful allies.
FOODS TO EAT:
*Fiber is extremely important in maintaining your tummy’s health, and peptic ulcers are no exception. Fresh fruit and vegetables provide tons of fiber, and they are also a great source of important vitamins, minerals and antioxidants that could potentially help your body protect and maintain a healthy stomach.
*Fruits and vegetables that have flavonoids and other compounds such as coumarins, alkaloids, terpenoids, tannins and phenolic acids are thought to have medicinal or functional properties in addition to the nutrition they offer. In strawberries, substances called polyphenols seem to help heal stomach ulcers in animal studies.
Foods that are rich in flavonoids, antioxidants and other phytochemicals include:
A. Strawberries
B. Apples
C. Celery
D. Cranberries
E. Onions
F. Garlic
G. Green tea
The science is continuing to expand, as well. Lab research suggests substances in black soy beans might be useful in fighting inflammation associated with H. pylori stomach infections. And, while milk usually makes the “foods to avoid” list because it promotes stomach acidity, some types of yogurt may actually be helpful for stomach ulcers. Evidence from animal studies suggests yogurts with certain probiotic lactobacillus bacteria may help to heal gastric ulcers.
WHAT TO AVOID
Generally, foods that are high in fat, high in acidity, or foods that tend to give you heart burn should be avoided.
Coffee: Whether caffeinated or decaffeinated, coffee is an acidic drink that may irritate the stomach lining.
Carbonated beverages: Also acidic in nature, sodas and carbonated beverages should be avoided.
Fatty foods: Foods high in saturated fats such as fatty cuts of red meat, dished made with heavy cream, or buttery pastries, tend to promote inflammation. Trans fats are even worse for you.
Tomatoes, citrus fruits, and their juices: Tomatoes and the acidity of tomato sauces can set people off. Citrus fruits, such as lemons, oranges, grapefruits, tangerines, and limes are higher in acidity than other fruits. To reduce the risk of irritation, try cutting out these acidy items.
Spicy foods: If spicy foods set you off, by all means cut them out of your diet. There is no evidence this will help heal an ulcer, but if it provides symptom relief, this is reason enough.
Chocolate, black pepper and peppermint are also frequently including on lists of offending foods, but individuals vary in how well they tolerate these and other items.
Alcohol: Alcohol stimulates acid secretion, and excessive alcohol is definitely counterproductive. Very modest alcohol consumption may not be bad for your peptic ulcer, however, so go with the advice of your doctor on this.
Smoking: According to the National Institute of Health, cigarette smoking increases the chance of getting a stomach ulcer. It also slows down the healing process and can worsen the condition.
HEALTHY ALTERNATIVES
Just because you have a stomach ulcer does not mean that you can only eat bland, boring foods. Fortunately, there are many milder, low-fat alternatives to popular foods out there.
Instead of fatty cuts of red meat:
*Poultry with the skin and fat removed
*Fish (if canned, make sure it is packed in water instead of oil)
*Tofu, beans and legumes as tolerated.
Instead of sodas or coffee:
*Most fruit juices, excluding citrus juices
*Water
*Mild teas
Instead of buttery pastries:
*Whole grain breads, tortillas, pita bread
*Desserts made with whole grains and made without trans fats
Instead of creamy condiments or spicy, acidic sauces:
*Non-fat mayonnaise
*Low fat salad dressings
*Honey
*Fresh or dried herbs
*Moderate salt and pepper
EMERGING AREAS OF RESEARCH
Vegetable Oil Ingredient Key to Destroying Gastric Disease Bacteria:
The bacterium Helicobacter pylori is strongly associated with gastric ulcers and cancer. To combat the infection, researchers at University of California, San Diego School of Medicine and Jacobs School of Engineering developed LipoLLA, a therapeutic nanoparticle that contains linolenic acid, a component in vegetable oils. In mice, LipoLLA was safe and more effective against H. pylori infection than standard antibiotic treatments.
The results are published online Nov. 24 in the Proceedings of the National Academy of Sciences.
“Current H. pylori treatments are facing a major challenge — antibiotic resistance,” said Liangfang Zhang, PhD, professor in the UC San Diego Moores Cancer Center and Department of Nanoengineering. “Our goal was to develop a nanotherapeutic that can tolerate the harsh gastric environment, kill H. pylori and avoid resistance.” Zhang and Marygorret Obonyo, PhD, assistant professor in the Moores Cancer Center and Department of Medicine, are co-senior authors of the study.
LipoLLA is a lipid (fat) particle that contains linolenic acid. When LipoLLA encounters H. pylori, it fuses with the bacterial membrane. Then the particle’s linolenic acid payload spills out, disrupting the membrane and killing the bacteria.
Zhang, Obonyo and their team labeled LipoLLA particles with fluorescent markers, fed them to mice and watched as the particles distributed themselves in the stomach lining — and stayed there. After treatment, they measured bacterial load in the stomach and markers of inflammation. Compared to standard antibiotic therapies, LipoLLA was more effective at getting rid of H. pylori. What’s more, LipoLLA was not toxic to the mice and the bacteria did not develop resistance to the therapy.
“This is the first step to verify that we can make this therapeutic nanoparticle and demonstrate that it works to reduce H. pylori colonization. We’re  now working to further enhance the particle, making it more stable and more effective,” Zhang said.
read more