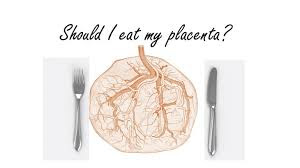 I have learnt of plenty quasi-medical cures and remedies but this particularly hit me as odd. Personally something didn’t sit right about the idea of munching down on a person’s after birth (termed placentophagy these days). I decided to delve a bit into it and not surprisingly to me, here is what I found.
So, first..
What Does the Placenta Do?

The placenta, or afterbirth, is the first organ that forms — even before any of th baby’s organs — after conception. It plays an important role in pregnancy: It connects mother baby in the uterus and delivers oxygen, nutrients, and hormones to her. It also takes away the waste that she makes.

The placenta grows throughout pregnancy. It is also the only organ the body makes and then gets rid of. After birth, it’s not needed anymore. If the baby arrived through vaginal delivery, it would be pushed out vaginally. If there is a C-section, the doctor will remove the placenta from the uterus. The placenta is a baby’s in-utero power pack, providing the fetus with all the vitamins, minerals, and nutrients — not to mention oxygen — to grow from just a few cells to a full-fledged baby. The placenta is also loaded with iron and vitamins B6 and B12, as well as estrogen and progesterone, both important postpartum hormones. Fans of the practice say that eating the placenta can protect against postpartum depression (PPD) — but only if you eat your own (never eat another woman’s since there’s a risk of disease). Proponents also point out that most other mammals routinely eat their placenta!

The truth is there’s not much evidence to say whether the practice benefits humans. A few small studies have connected placenta-eating with increased breast-milk supply and pain relief (the latter only in rats). But no studies have looked at the possible risks, if any, of ingesting human tissue. In the case of some pregnancy conditions — preeclampsia, for example — the placenta may harbor stress proteins. No one really knows what effect, if any, these proteins have if consumed them. The bottom line: Overwhelmingly, mainstream medical experts believe that there’s no proven reason to eat your afterbirth.

What Is Placenta Encapsulation?

Placental encapsulation is the practice of ingesting the placenta after it has been steamed, dehydrated, ground, and placed into pills. Traditionally, this is taken by the mother and is believed to impart numerous health benefits. It is frequently taken shortly after giving birth, during a woman’s menstrual period, or during menopause with the belief that it helps counter some of the symptoms of menopause

Placental encapsulation appears to carry no inherent risk if ingested solely by the mother. Some mothers have reported experiencing negative symptoms such as dizziness or jitteriness after taking the pills. Again, most of the information regarding this practice is amassed from anecdotes, and not from research. In addition, if taken by other family members or friends, one must be aware of the possibility of passing along blood-borne diseases.
But despite the fact that this piece of tissue comes directly from inside your own body, there could be some real risks to ingesting it. Think about these concerns before you take a bite.

It could be contaminated:

Even before you give birth, the placenta serves as a filter, keeping some dangerous things away from your baby–some of which could still be contained in the placenta. “While the placenta is in-utero, it’s almost like a filter, filtering out things the baby shouldn’t get, including bacteria–and then you’re going to ingest it,” says Titi Otunla, a certified nurse midwife at Texas Children’s Pavilion for Women in Houston. “It doesn’t sound right.” And let’s face it: Even if you deliver in a germ-conscious hospital, the birth process involves an awful lot of bodily fluids and chances for contamination. “The placenta can become infected, and the vagina isn’t sterile either,” says Marra Francis, M.D., an ob-gyn in Woodlands, Texas, and an author of the Mommy MD Guides. “Women often defecate during labor, and there’s even more bacteria in feces, which can contaminate the placenta during birth. Why would you want to risk introducing these infectious agents back into you?”

It may be hard to keep it “food safe.”

You probably wouldn’t eat a steak that’s been left out on a counter all day, right? Unless you bring a cooler and ice with you when you go into labor, you may not have access to proper refrigeration fast enough to preserve the placenta. “You’ll need to make sure someone comes within an hour or two and takes it home to a freezer or refrigerator,” Otunla says.

You may not even get the benefits you were seeking.

Most moms today don’t take a bite of the raw placenta; it’s often cooked and either dehydrated and ground into a powder that’s placed in pill capsules, or frozen and used in fruit smoothies. But many of these processes, especially cooking, can damage the very nutrients you’re hoping to receive. “You have to cook at sterilization levels, and at that point, you’ve denatured all of the proteins and the hormones that you think are going to help you heal,” Dr. Francis says. “You have to cook at such high levels to kill bacteria that you will kill everything you think is good, too.”

Placentas are rich in blood, lending it a coppery flavor. Chefs who have cooked it, like Daniel Patterson of Coi and several other San Francisco restaurants, compare it to squab. Others suggest it’s like liver, and a few compare it to chicken. In any case, you may be doing a whole lot of prep for a less-than-stellar eating experience.

Any hormones still left in the placenta are destroyed by the digestive system. Oxytocin for example is not bio-available via eating. That’s why it is always given by injection (or occasionally inhalation) to bypass metabolism by the liver. Placenta encapsulation is such a monumental rip-off in my view. Cynical value-adding which costs the mother a lot of money for little or no benefit. To avoid postnatal depression (PND), the mother should be well-nourished (ensuring her iron stores are good), try to give birth in as undisturbed way as possible, have good postnatal support in the home, and be educated about what having a new baby is like. Many mothers put unrealistic pressures on themselves (that is aside from all the pressure from society!). PND is skyrocketing but eating placenta is not the answer. There are foods and supplements which can help tremendously in amelioration of. PND without side effects or health risks. Its always better to be safe than sorry.