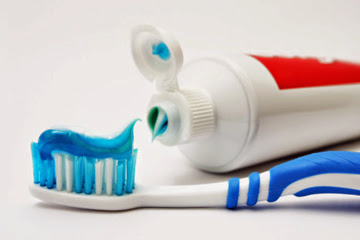 A Lot of toothpastes and mouthwashes include flouride in their products and for good reason too. Flouride protects the tooth enamel amongst other effects it has on the dentition. But when used in excess and on constant swallowing could cause serious health  issues. See some of them:
ARTHRITIS

Current evidence strongly indicates that some people diagnosed with “arthritis” are in fact suffering from low-grade fluoride poisoning.

Joint pain and stiffness are well known symptoms of excessive fluoride intake. According to the U.S. Department of Health and Human Services, too much fluoride causes “chronic joint pain” and “arthritic symptoms.” U.S. health authorities have long dismissed the relevance of this by insisting that fluoride only causes arthritic symptoms in patients with advanced forms ofskeletal flourosis, a bone disease caused by fluoride.Modern research clearly shows, however, that fluoride-induced joint pains can occur in theabsence of obvious skeletal fluorosis. This makes fluoride’s effects on joints extremely difficult to differentiate from common forms of arthritis. In fact, research has found that fluoride can be a direct cause ofosteoarthritis, with or without the presence Of classic skeletal floursosis.

In cases where fluoride is the cause of a person’s arthritic problems, reduction in daily fluoride intake for a period of several weeks or months can eliminate the symptoms in the absence of medical treatment. Correct diagnosis is thus critical to effective recovery.

While the concentrations of fluoride causing genetic damage in laboratory studies are generally far higher than the concentrations found in human blood,there are certain “microenvironments” in the body (e.g., the bones, bladder, kidneys, oral cavity, pineal gland) where cells can be exposed to fluoride levels that are comparable to those causing genetic damage in the laboratory. Moreover, some research has found that cells of primates (including great apes and humans) are more susceptible to fluoride’s mutagenic effects than cells of rodents.

In the 1990s, a British scientist, Jennifer Luke,discovered that fluoride accumulates to strikingly high levels in the pineal gland.The pineal gland is located between the two hemispheres of the brain and is responsible for the synthesis and secretion of the hormone melatonin. Melatonin maintains the body’s circadian rhythm (sleep-wake cycle), regulates the onset of puberty in females, and helps protect the body from cell damage caused by free radicals.

While it is not yet known if fluoride accumulation affects pineal gland function, preliminary animal experiments found that fluoride reduced melatonin levels and shortened the time to puberty. Based on this and other evidence, theNational Research Councilhas stated that “fluoride is likely to cause decreased melatonin production and to have other effects on normal pineal function, which in turn could contribute to a variety of effects in humans”.

The Brain
A review of brain studies involving the use of fluoride has concluded that one of the adverse effects of fluoride exposure on children is damage to their neurological development.According to the Harvard researchers, children who lived in high-fluoride areas had “significantly lower IQ than those in low fluoride areas,”.Extremely high levels of fluoride are known to cause neurotoxicity in adults, and negative impacts on memory and learning have been reported in rodent studies.