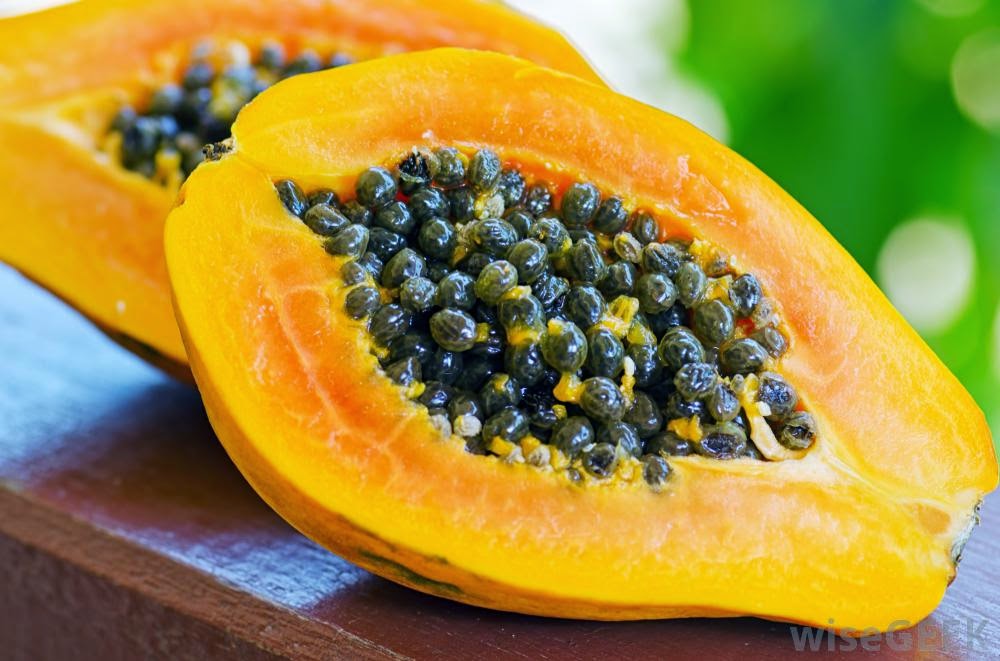 The Paw-paw or Carica Papaya as botanically known is amongst the healthiest fruits on earth. It is loaded with anti-oxidants, vitamins and minerals. Virtually every part of the paw-paw tree is useful; some of these would be treated on a later date as a separate topic. For now, a review on the fruit and it’s notorious cancer preventive and curative property would be thrashed out on this article.
Papaya Contains Antioxidants
One of the benefits of eating papaya is that it helps to prevent cancer. Papaya is a rich source of antioxidants that the body needs to fight against cancer-causing cells. Vitamin C, E and beta-carotenes are antioxidants that prevent all kinds of cancers. So adding a daily serving of papaya to your diet may lessen your risk of developing cancer.
Papaya is Used to Treat Digestive Disorders
Papaya is a great source of proteolytic enzymes that are very important in digesting food. The most important of these proteolytic enzymes found in papaya is papain. Papain breaks down proteins in food, allowing for better digestion. Papain is used in prescription of digestive enzymes to treat individuals with cystic fibrosisor pancreatic conditions; producing for them what the body cannot produce naturally. Eating papaya is also a benefit because papain taken orally treats less serious digestion disorders such as bloating and chronic indigestion. In these cases papain is extracted, dried and sold as tablets.
Papaya Boosts Male Virility
Another great benefit of papaya is to boost male virility. Papaya contains an enzyme called arginine which is known in the medically community to boost blood flow around the man-hood. Arginine boosts nitric acid in the body to relax the muscles surrounding the blood vessels tat supply the man-hood. These blood vessels then dilate and increase blood flow. A more concentrated form of arginine is used to treat erectile dysfunction.
Papaya Prevents Premature Aging
Many alternative medical practitioners believe that one of the benefits of papaya is to control premature aging. Papaya helps the body to properly digest food and when the body digests all the nutrients it needs, the body will remain vital for a long time.
Papaya is Used as a Cleanser
Taking a quarter pint (150ml) of papaya juice, cucumber juice and green bean juice in alternating hours for 12 hours can be a benefit to your colon. These juices work as potent natural cleansers when combined.
Papaya is also rich in fiber, which travels through the body and binds itself to cancer-causing toxins in the colon. The fiber in papaya flushes out the toxins in the colon and so one of the benefits of papaya is that it helps prevent colon cancer especially, due to its antioxidants and its fiber content.
Papaya Prevents Heart Attacks and Strokes
The antioxidants in papaya prevent cholesterol from oxidizing. When cholesterol becomes oxidized it forms plaque in the blood vessel walls that can eventually build up and cause a heart attack or stroke.
Also, fiber is known to lower cholesterol. The fiber in papaya converts a substance called homocysteine into harmless amino acids that the body can process, but without the breakdown, homocysteine can eventually damage blood vessel walls, causing strokes or heart attacks.
Papaya Treats Inflammation
Papain and chymopapain, protein-digestive enzymes found in papaya lowers inflammation and improve healing from burns. Papain breaks down the inactive proteins in the skin, removing dead tissue from burns. This benefits the body as it helps heal skin injuries, relieves psoriasis, removes warts, treats ringworms and cold sores.
Also vitamins C, E and beta carotenes are good at reducing inflammation and as such these nutrients are used to treat asthma, osteoarthritis and rheumatoid arthritis among many other inflammatory ailments.

In the 1970s, under funding form the National Cancer Institute, McLaughlin, a professor of pharmacognosy at Purdue University, started studying the anti-cancer potential of botanical substances from over 3,500 plant species. In his studies, he discovered a type of long-chain fatty acid called acetogenins contained in the pawpaw fruit that he found to possess the greatest anti-cancer potential of all the compounds he’d examined. McLaughlin spent the next 20 years studying the therapeutic potentials of these pawpaw acetogeninsm.

The acetogenins from the pawpaw tree, or annonaceous acetogenins, starve cancer cells of the energy they need to survive and reproduce. All cells take in glucose from the blood supply and turn it into energy, called adenosine tryphosphate, or ATP. According to McLaughlin’s research, cancer cells require around 10 to 17 times more ATP than normal healthy cells and therefore tend to hog the glucose entering the bloodstream to produce all the ATP it needs to thrive. Annonaceous acetogenins is distributed in the blood supply with the glucose throughout the body. Like the glucose, most of the acetogenins wind up in the cancer cells where they impair ATP production. The resulting decrease in ATP also serves to reduce the effect known as multiple drug resistance in which cancer cells develop the ability to identify and reject chemicals anathema to it, like chemotherapy.

According to a 2008 report McLaughlin published in the “Journal of Natural Products”, the annonaceous acetogenins in paw paw have cytotoxic properties against cancer tumor cells. His report affirms that an encapsulated extract of these acetogenins has been used successfully by cancer patients as a supplementary therapy. A 2009 report in the “Journal of Agriculture, Food and Chemistry” backs up McLaughlin’s research, verifying the anti-tumor activity of pawpaw’s annonaceous acetogenins.
A Few Consumption Suggestions include:
TEA from Papaya Leaf
Take a leaf the size of your two hands and cut it up in to small pieces, place in small pot with half a litre of water hot, boil for ten minutes stir every minute or so. Once it has been boiled strain liquids from leaf let it cool then drink.
DRINK from Papaya Seeds
Eat an 1/8 of papaya fruit every day, take the seed from the fruit and place in beaker, place a small cup of water with it and mix and break up seed with a bar-mix or use a blender. Once seed has been broken and mixed strain drink of seed husk with a small sieve, then drink slowly at first.
read more