ANOINTING FOR BODY AND SOUL 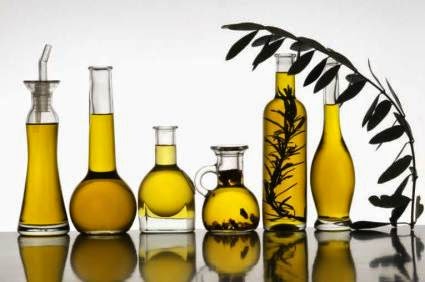 In Nigeria, especially among the christian folk, the name “olive oil” is religiously connoted to mean the anointing of the holy ghost. The only time you’d find it in any Nigerian household is when it is used to anoint and pray for healing and against demons. Well, I’m here to tell you that olive oil can work other wonders beyond the spiritual. Olive oil is Mediterranean and can be used in cooking or preparing dressers. It has been ranked among the world’s healthiest oil especially the “Extra-Virgin olive oil”. Now, what makes this oil a “virgin”?..lets take a look at the types of olive oil.

Types of olive oil
Olive oil is produced by the pressing or crushing of olive fruit. It comes in different grades, depending on the amount of processing involved. There are unrefined (virgin) grades and refined grades. The less the oil is refined by heat and chemical treatments, the higher the quality of the oil.
Virgin varieties of olive oil are believed to offer the greatest health benefits as they retain most of the nutrients from the olive fruit.
Varieties include:
A.) Extra virgin – This oil is considered to be the premium grade of olive oil. It is made from the first pressing of olives. The oil is extracted by the traditional cold-pressing method, where no chemicals and only a small amount of heat are applied.
B.) Virgin – This oil is produced from the second pressing of olives or from the second-best grade of olives by cold-pressing, without use of chemicals and use of little heat.
C.) Olive oil – Also marketed as ‘pure’ olive oil. This type of oil is non-virgin, commercial-grade olive oil. It is ‘pure’ olive oil to the extent that it consists only of olive oil. This grade of olive oil consists of the inferior oil that is a result of subsequent pressings after the virgin oil has been extracted from lower-quality olives. This oil then undergoes a refining process involving heat, chemical solvents, high pressure and filtration treatments. This oil is then mixed with a small quantity of virgin olive oil to restore colour and flavour.
D.) Light and extra light – These oils are produced from the last pressing of olives. They are more refined and of lower quality than the other grades. There is little of the natural olive flavour and colour in these oils.
Anti-inflammatory Effects:
The anti-inflammatory strength of olive oil rests on its polyphenols. These anti-inflammatory compounds include at least nine different categories of polyphenols and more than two dozen well-researched anti-inflammatory nutrients. Research has documented a wide variety of anti-inflammatory mechanisms used by olive oil polyphenols to lower our risk of inflammatory problems. These mechanisms include decreased production of messaging molecules that would otherwise increase inflammation (including TNF-alpha, interleukin 1-beta, thromboxane B2, and leukotriene B4); inhibition of pro-inflammatory enzymes like cyclo-oxygenase 1 and cyclo-oxygenase 2; and decreased synthesis of the enzyme inducible nitric oxide synthase.

Cardiovascular Benefits:
In terms of antioxidant protection for our blood vessels, olive oil has been shown to lower risk of lipid peroxidation (oxygen damage to fat) in our bloodstream. Many of the fat-containing molecules in our blood—including molecules like LDL—need to be protected from oxygen damage. Oxygen damage to molecules like LDL significantly increases our risk of numerous cardiovascular diseases, including atherosclerosis. Protection of the LDL molecules in our blood from oxygen damage is a major benefit provided by olive oil and its polyphenols. Equally important is protection against oxygen damage to the cells that line our blood vessels. Once again, it’s the polyphenols in olive oil that have been shown to provide us with that protection.Olive oil is one of the few widely used culinary oils that contains about 75% of its fat in the form of oleic acid (a monounsaturated, omega-9 fatty acid). Research has long been clear about the benefits of oleic acid for proper balance of total cholesterol, LDL cholesterol, and HDL cholesterol in the body.
Digestive Tract Benefits:
Recent research has provided us with even more information, however, about olive oil, its polyphenols, and protection of the digestive tract. One fascinating area of recent research has involved the polyphenols in olive oil and the balance of bacteria in our digestive tract. Numerous polyphenols in olive oil have been shown to slow the growth of unwanted bacteria, including bacteria commonly responsible for digestive tract infections. These polyphenols include oleuropein, hydroxytyrosol, and tyrosol. Some of these same polyphenols—along with other olive oil polyphenols like ligstroside—are specifically able to inhibit the growth of theHelicobacter pyloribacterium. This effect of the olive oil polyphenols may be especially important, since overpopulation ofHelicobacterbacteria coupled with over-attachment of Helicobacter to the stomach lining can lead to stomach ulcer and other unwanted digestive problems.
Cognitive Benefits:
Improved cognitive function—especially among older adults—is a well-known feature of the Mediterranean Diet. As the staple oil in that diet, olive oil has been of special interest for researchers interested in diet and cognitive function. In France, a recent study large-scale study on older adults has shown that visual memory and verbal fluency can be improved with what the researchers called “intensive use” of olive oil. In this case, “intensive use” meant regular use of olive oil not just for cooking, or as an ingredient in sauces and dressings, but in all of these circumstances.
Anti-Cancer Benefits:
The polyphenols found in olive oil are a natural for helping us lower our risk of certain cancer types. Many types of cancer only get initiated when cells are overwhelmed by oxidative stress (damage to cell structure and function by overly reactive oxygen-containing molecules) and by chronic excessive inflammation. Since the polyphenols in olive oil act both as antioxidants and anti-inflammatory molecules, they are perfectly suited for lowering our cells’ risk of oxidative stress and chronic unwanted inflammation. Research studies have shown that as little as 1-2 tablespoons of olive oil per day can lower our risk of certain cancer types, including cancers of the breast, respiratory tract, upper digestive tract, and to a lesser extent, lower digestive tract (colorectal cancers). In some research studies, the anti-cancer benefits of olive oil do not show up until the diets of routine olive oil users are compared with the diets of individuals who seldom use olive oil and who instead consume added fats that are more saturated in composition (for example, butter).

Olive Oil and Alzheimer’s Disease:
Alzheimer’s disease is the world’s most common neuro degenerative disease and a leading cause of dementia.
One feature of Alzheimer’s is a buildup of protein tangles called beta amyloid plaques, in certain neurons in the brain.
A study in mice showed that a substance in olive oil can help to clear these plaques from the brain. A human controlled trial showed that a mediterranean diet enriched with olive oil had favorable effects on brain function and reduced the risk of cognitive impairment
Storage
How you store it matters.
When you’re at the grocery store, look for olive oil that comes in a bottle made from dark green glass or another material that protects it from light,Heat and light can damage the oil by creating oxidation, which changes the beneficial chemical compounds. Store your olive oil in a room-temperature cupboard or in the refrigerator to keep it cool.
How to Enjoy
A Few Quick Serving Ideas
*Use extra virgin olive oil in your salad dressings.
*Puree minced garlic, cooked potatoes and extra virgin olive oil together to make exceptionally delicious garlic mashed potatoes. Season to taste.
*Drizzle extra virgin olive oil over healthy sautéed vegetables before serving.