Effects of Too Much Salt on the Human Body. 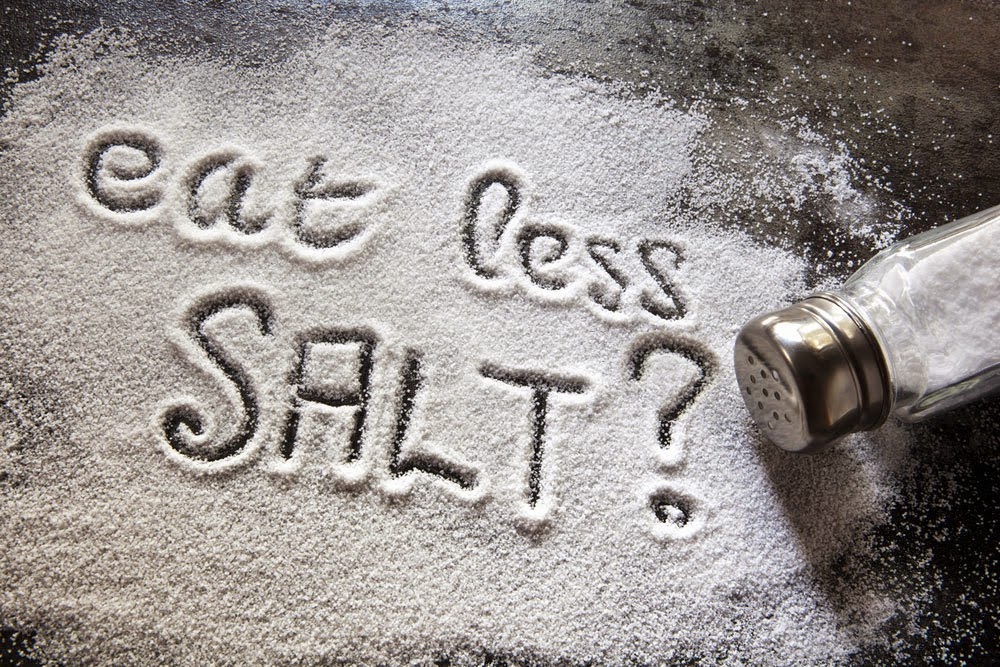 Table salt and sodium form the bane of a lot of problems bothering the dietetic profession. It has a lot to do with high blood pressure, kidney diseases and indeed diabetes. Salt provides your body with sodium, which is necessary for proper muscle function and regulating the amount of water in the body. The average daily sodium intake for most people should be 1500 milligrams, while the maximum intake is 2300 milligrams. This translates to one table spoon of salt per day. Consuming more sodium than the maximum daily recommended intake is harmful.
High Blood Pressure
Answering the Age-Long Question: How Does Soodium Cause HBP?
The Kidneys removes unwanted fluid by filtering your blood through your kidneys. Here any extra fluid is sucked out and put into your bladder to be removed as urine. To do this, your kidneys use osmosis to draw the extra water out of your blood. This process uses a delicate balance of sodium and potassium to pull the water across a wall of cells from the blood stream into a collecting channel that leads to the bladder.
Eating salt raises the amount of sodium in your bloodstream and wrecks the delicate balance, reducing the ability of your kidneys to remove the water. The result is a higher blood pressure due to the extra fluid and extra strain on the delicate blood vessels leading to the kidneys.
Over time, this extra strain can damage the kidneys – known as kidney disease. This reduces their ability to filter out unwanted and toxic waste products, which then start to build up in the body. If kidney disease is left untreated and the blood pressure isn’t lowered, the damage can lead to kidney failure. This is when the kidneys are no longer able to be filter the blood and the body slowly becomes poisoned by its own toxic waste products. If you have high blood pressure and are being treated with a diuretic medication, this makes the kidneys remove more fluid from the bloodstream. Because the sodium in salt counteracts this effect,reducing your salt intakewill makeyour blood pressure medicine more effective.
Blood pressure caused by eating too much salt puts extra strain on the insides of your arteries. To cope with the extra strain, the tiny muscles in the artery walls become stronger and thicker. Yet this only makes the space inside the arteries smaller and raises your blood pressure even higher.
This cycle of increasing blood pressure (which occurs slowly over a number of years) can ultimately lead to the arteries bursting or becoming so narrow that they then clog up entirely. When this happens, the organs of the body that were receiving the blood from the arteries become starved of the oxygen and nutrients they need. This can result in the organs being damaged and can be fatal.
Fluid Retention:

Also known as edema, fluid retention occurs when excess fluid accumulates in your body, including the skin. This condition can be caused by hormone changes, hot weather and high salt intake. It is characterized by swelling in the hands, ankles and feet and a feeling of stiffness or aching. Reducing your salt intake and drinking a lot of water can help alleviate this condition
Hypernatremia:

When the levels of sodium in your body are higher than is normal, this condition is known as hypernatremia. It is caused by a variety of factors, including certain drugs, abnormalities in your body that hinder water absorption, and reduced water intake. In rare instances, hypernatremia may also be caused by excessive salt consumption. A study by scientists at University of Hamburg published in the January 2005 issue of “Legal Medicine” found that using excess salt to induce vomiting in intoxicated persons may lead to death due to fatal hypernatremia.
Stomach cancer:
A high salt diet increases the risk of stomach cancer. A quarter of the 7000 new cases each year can be attributed to salt. The bacterium Helicobacter pylori (H. pylori) is the major risk factor for stomach cancer as it can lead to inflammation of the stomach which can in turn lead to stomach ulcers and stomach cancer. H. Pylori in the stomach will not necessarily cause damage, however salt can damage the lining of the stomach, making it more vulnerable to the effects of H.pylori, and salt may also increase the growth and action of the bacterium making it more likely to cause damage. Men are at a higher risk than women and there are other important risk factors for stomach cancer explained in the fact sheet.
Osteoporosis:
Osteoporosis is a condition which causes thinning of bones, making them brittle and prone to breaking. In the UK an estimated 3 million people are suffering from osteoporosis; 1 in 2 women and 1 in 5 men will break a bone after the age of 50, mainly due to poor bone health.
Most calcium in the body is stored in bones. A high salt diet can cause calcium to be lost from bones and excreted in the urine, making bones weak and easily broken. High blood pressure caused by a high salt diet can speed up the loss of calcium from bones, worsening the problem. Older people are most at risk of osteoporosis because bones naturally become thinner as we get older. Postmenopausal women are particularly at risk of bone thinning due to the drop in the hormone oestrogen which normally protects bone health. However, men, women and children of all ages need to look after their bone health to avoid osteoporosis later on.
Balancing Things Out: The importance of potassium
Sodium and potassium have opposite effects on heart health: High salt intake increases blood pressure, which can lead to heart disease, while high potassium intake can help relax blood vessels and excrete the sodium and decrease blood pressure.
Our bodies need far more potassium than sodium each day, but the typical diet is just the opposite: Americans average about 3,300 milligrams of sodium per day, about 75 percent of which comes from processed foods, while only getting about 2,900 milligrams of potassium each day. A recent study in Archives of Internal Medicine provides more evidence that high salt diets have negative effects on health, and found that:
*People who eat high sodium, low potassium diets have a higher risk of dying a heart attack or from any cause.
*People can make a key dietary change to help lower their risk: Eat more fresh vegetables and fruits, which are naturally high in potassium and low in sodium—and eat less bread, cheese, and processed meat, as these and other processed foods are high in sodium and low in potassium.
read more