Cause and Treatment of Cataracts 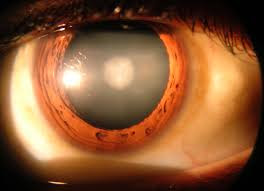 Cataracts occur when the eye’s lens, the clear layer that focuses light on the retina, becomes cloudy. Because of this, the lens cannot send a sharp image to the retina, the light-sensitive layer at the back of the eye that transmits nerve signals to the brain recording what is seen.
As one ages, proteins in the lens begin to break down and the lens becomes cloudy. You may not even realize you have a cataract because it usually grows very slowly and may not impede vision early on. While cataracts are rarely dangerous, after a number of years they will likely affect vision.
Causes 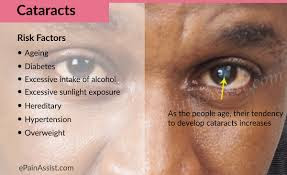 The lens is made mostly of water and protein. Specific proteins within the lens are responsible for maintaining its clarity. Over many years, the structures of these lens proteins are altered, ultimately leading to a gradual clouding of the lens. Rarely, cataracts can present at birth or in early childhood as a result of hereditary enzyme defects, and severe trauma to the eye, eye surgery, or intraocular inflammation can also cause cataracts to occur earlier in life. Other factors that may lead to development of cataracts at an earlier age include:
* Excessive ultraviolet-light exposure
* Diabetes
* Smoking
* The use of certain medications, such as oral, topical, or inhaled steroids. Other medications that are more weakly associated with cataracts include the long-term use of statins and phenothiazines. 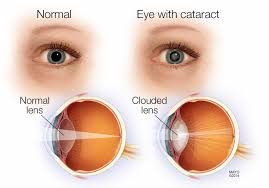 Treatment:
While the use of new eyeglasses, magnifying devices and brighter lights may stave off cataracts’ effects on vision for a period of time, surgery is the only treatment. Surgery is usually considered when cataracts begin to impinge on quality of life, affecting driving, reading or the ability to perform normal activities. Since cataracts don’t damage the eye, there is no harm in delaying the procedure.
Cataract surgery is the most common operation among those over age 65, according to the Kellogg Eye Center, and more than 2 million are done each year on people of all ages. The surgery lasts about 30 minutes and vision typically improves within a day. 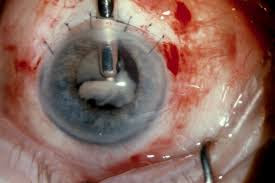 Also called phacoemulsification, this is the most common type. During the procedure, a tiny probe is inserted into the eye through a small incision on the side of the cornea. This probe releases ultrasound waves that soften and split the lens into pieces, which are suctioned away.
Extracapsular surgery:
A longer incision is made on the side of the cornea and the cloudy core of the lens is removed in one piece. The rest is suctioned away.
Laser-assisted cataract surgery:
Instead of using a handheld blade to make the incision, doctors can use a precise laser to make the cuts instead. The laser may also help break up the cataract, which can lessen the amount of ultrasound surgeons need to break up the cataract later, Donnenfeld said. This relatively new technique has additional out-of-pocket costs for patients, he said.
In all of the procedures, the removed lens is replaced with an artificial one made of plastic, according to the NEI. It becomes a permanent part of the eye and cannot be felt or seen. Patients can choose from several lens implants. Most people choose a monocular single focus lens for both eyes, and rely on reading glasses for near-visual tasks. Others ask to have one eye corrected for distance and the other.
Hope you have learnt something new as was the goal of this article (to edify the mind). Stay Informed.
read more