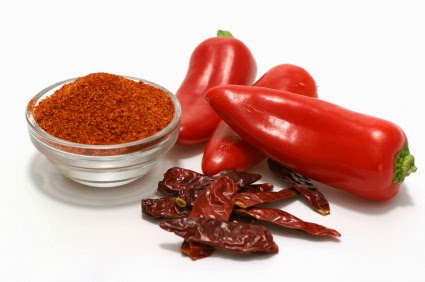 Contrary to popular belief, I got a hint that red pepper especially of the “chilli” (cayenne; as often referred in this article) sort does more than spice up our meals. It has loads of health benefits!. I figured since it was so. Red, it HAD to be rich in antioxidants and guess what I was right! Turns out chilli is even a medicine in its own right, read on to find out.
Chili has been used in traditional Chinese and Ayurvedic medicines to help treat circulatory problems and increase appetite. What gives the chili its spiciness is the active ingredient capsaicin, which is commonly used for the treatment of aches and pains of the muscles and joints.
Nutritional profile of cayenne
Cayenne is rich in capsaicin. The pepper also containsvitaminC, vitamin B6, vitamin E, potassium, manganese, and flavonoids (which give the chili its antioxidant properties).
Relieving pain:

Capsaicin – a compound found in cayenne peppers may have pain-relieving properties, according to a systematic review of topical capsaicin for the treatment of chronic pain published in theBritish Medical Journal. The researchers concluded that despite only moderate efficacy of capsaicin in the treatment of chronic musculoskeletal or neuropathic pain, it”may be useful as an adjunct or sole therapy for a small number of patients who are unresponsive to, or intolerant of, other treatments.”
In addition, research published in theJournal of Clinical Oncology, found thatthe application of capsaicin cream among cancer survivors with postsurgical neuropathic pain can reduce postsurgical neuropathic pain.
Burning calories and suppressing appetite:

A group of researchers at Purdue University conducted a study that evaluated the “effects of hedonically acceptable red pepper doses on thermogenesis and appetite”. The findings of their study, published in the journalPhysiology & Behavior, suggest thatconsuming just half a teaspoon of cayenne pepper along with a meal can help suppress appetite and burn calories.
Cayenne pepper increases fat oxidation by 42% when used with exercise. In some trials,cayenne pepperhas proven helpful in decreasing appetite, furthering its ability to help with weight loss. A general recommendation would be to drink a half of a teaspoon of powdered cayenne pepper in eight ounces of water or juice 30 to 60 minutes before a workout.
Treating psoriasis:

A double-blind study that evaluated the topical application of capsaicin in treating psoriasis revealed that it can significantly improve itching and other symptoms associated with psoriasis. The research, published in theJournal of the American Academy of Dermatology, concluded that”topically applied capsaicin effectively treats pruritic psoriasis.”
Treating cluster headaches:
Topical application of capsaicin may help treat cluster headaches. A study published inCephalalgia found that capsaicin can desensitize sensory neurons by depleting the nerve terminals of substance P – a neuropeptide associated with inflammatory processes and pain. The authors of the study concluded:”these results indicate that intranasal capsaicin may provide a new therapeutic option for the treatment of this disease.”
Cayenne is antimicrobial:

Becausecayennehas an antimicrobial action, research with cayenne has shown that it can be used to delay microbial growth in stored foods. In tests, cayenne reduced the growth of microflora, yeast and molds in Kareish cheese. Because of these cleansing qualities, it is often used in herbal therapies that demand an increase in blood circulation. It is also used in detox programs.
Because it is a stimulant, it can keep a person awake and prevent grogginess.
Cayenne increases circulation:
Cayenne has the unique ability to stimulate circulation, so it is often used in herbal therapies that demand an increase in blood circulation. Recent research has shown that cayenne acts as a natural vasodilator and may be useful in treating angina. Because of its ability to improve blood flow, cayenne is used by herbalists to heal muscle and joint pain, and even to speed healing of damaged tissue. Increased blood flow provides a source of healing nutrients to the tissue, and the blood also carries away the toxins from the damaged or wounded area. Cayenne can be used internally or in a topical application.
Other Health Benefits:
It’s a stimulant herb and a digestive aid, helping improve digestion and soothing inflammation. It helps remove toxins from the body, relieves gastrointestinal problems including bleeding ulcers, colic, dyspepsia, flatulence and even diarrhea. It helps relieve the pain of shingles, cluster headaches, and itching palms and feet of diabetes.Capsicum has been proven beneficial for arthritis, cardiovascular disease, gastric ulcers, vascular headaches, impotence (resulting from venous insufficiency), infections, kidney problems, menstrual complaints, respiratory conditions such as asthma and pleurisy, and thyroid dysfunction.
Shocker!
Cayenne can help heal ulcers!
*Cayenne pepper can also help heal ulcers. It’s commonly believed that spicy foods cause peptic ulcers, but that information is incorrect. According to Dr. George F. Longstreth of Kaiser Permanente Medical Care Program in San Diego, most peptic ulcers are caused by bacterial infections, primarily H.pylori. Overuse of some medications, such as Advil and Motrin, are also common causes of ulcers because they cause acid production in the stomach, which damages the stomach lining. Cayenne pepper helps neutralize acid. Sippingcayennepepper tea can help heal a peptic ulcer. Capsaicin, the active compound in cayenne peppers, can repair a damaged stomach lining and protect the colon, according to the Medical University of Pecs.
*Chilli Pepper Heals Heart Attacks Fast!
Did you know that you can actually stop a heart attack in its tracts with the simple but amazing and awesome power of cayenne pepper? It’s true. Cayenne pepper can actually stop a heart attack in about 60 seconds flat!
First the Cayenne pepper must be at least 90,000 heat units or 90,000(H.U.) to be able to stop a heart attack. If the cayenne is at least 90,000 H.U. and the person is still conscious, the recommendation is to mix 1 teaspoon of cayenne powder in a glass of warm water (this is essentially a “cayenne tea”), and give it to the person to drink.If the person is unconscious then the recommendation is to use a cayenne tincture or extract, again of at least 90,000 H.U., and put a couple of full droppers underneath their tongue full strength
*A little Capsicum sprinkled in water and gargled will eliminate a sore throat.
*Got a splinter? Combine Capsicum and Plantain and apply externally to draw out foreign items embedded in the skin.
*Got cold feet? Sprinkle Capsicum in your socks (also helps prevent frostbite). If that’s a bit strong, sprinkle it into your shoes. The heat will go through your socks.
*Please note that taking one or two capsules of Capsicum is not going to do the trick. It might require seemingly large amounts (2 or 3 capsules 2 or 3 times a day) to achieve the desired results.
Precautions and side effects of cayenne:

People are advised to wash their hands straight after using cayenne and avoid touching their eyes. According to theNYU Langone Medical Center, when capsaicin creams are applied they are capable of causing an unpleasant burning sensation.6
In addition, people who are on ACE inhibitors or stomach acid reducers should avoid taking cayenne.
Taking cayenne at the same time as ACE inhibitors (such as Captopril and Elaroptril) can increase the risk of cough – one of the side effects of ACE inhibitors. Cayenne can increase stomach acid, which makes stomach acid reducers (such as Famotidine and Cimetidine) less effective, according tothe University of Maryland Medical Center.
PLEASE NOTE!!
This information is for educational purposes only and is not meant to diagnose or treat disease. Consult your health care professional.
Tags : Health Benefits of Red Pepper
previous article